Google Places search was released on October 27 with a great deal of fanfare and commentary. It has been available for over a month and the Places Dashboard analytics data can now provide some insight into the impact of the new display.

I have assembled an overview of the impressions and actions based of the Dashboard analytics for 45 listings for the 4 weeks prior to the rollout and the 4 weeks after the rollout.

I recognize that these numbers are, by design, superficial and are on occasion buggy (showing fewer impressions than actions). We also don’t know if the analytics kept up with the main search results page. However in aggregate, they do provide some general insights about the switch. The business listings represent a range of industries, locales and business size so the sample should represent a reasonable cross section of reality.

The number of listings with increases is roughly equal to those with decreased actions although the average increase was significantly higher than the average loss. I have not done a granular enough analysis to fulling understand but it appears that strong (ie better ranking websites) got stronger and the weak lost visibility.

In one particular case, it is obvious that a business in the burbs that was doing well organically but not locally on the major city searches has been rewarded with a blended placement on the major geo phrase. The bears further study but gave me the distinct impression that the geo area that defines a given search has in some cases been expanded and that businesses that were previously outside of that range now have a shot at first page blended placement.

It is interesting that the actions increased while the impressions were down. The average of actions to impressions increased from 7.17% to 12.26%. This would imply that the UI changes with Places search significantly increases Places related actions (directions, website clicks, more info clicks) and is more efficient at leading to actions that Google wants. This makes sense in that previously some local search traffic was “lost” to organic results. These results obviously reflect the new blended reality. 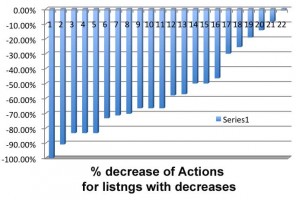 One area that would be of use to explore would be to examine the relative changes in specific behaviors within the Actions and compare that to changes in website traffic overall. It would be interesting to know if Google or the business is capturing more of the activity.

As in many changes, there were winners and losers. But in the end if more people are finding what they want with fewer searches then those businesses that understand the rules, the users AND Google will all benefit.

The announcement indicates that Boost as configured is working well. The borad and rapid roll out indicates that Google is ramping quickly and we should see Boost available nationally and probably internationally in the not too distant future.

I am curious from those of you that have tried it, your impressions.