It seems that, in the last few hours, Microsoft have pushed out a new release of the Bing Maps AJAX control (or, maybe their content delivery network has only just started serving a new version – the timestamp attached to the library URL, http://ecn.dev.virtualearth.net/mapcontrol/v7.0/js/bin/7.0.20110426171249.81/en-us/veapicore.js, suggests that it may have been compiled 10 days ago, on 26th April 2011).

This is a minor release – it’s not version 7.1 – so you wouldn’t normally expect to see much in the way of new features. However, it is significant since it appears to resolve a fairly crippling bug that previously made the map control unusable if instantiated in a container of the page that was not visible on initial load (i.e. if you wanted your map to be absolutely positioned in a div near the bottom of a long page that required the user to scroll to get to it).

There is also at least one change made to the default behaviour of the map, in that panning now exhibits an inertia effect – the map does not abruptly stop when you release the mouse button after panning, but slides to a gradual standstill. This change follows the trend of a lot of previous enhancements to v7, in making the AJAX control behave more like its Silverlight cousin (which has always had optional inertia).

You don’t need to do anything to use the new version – any requests to the v7 library will automatically retrieve the latest version, as follows:

Of course, you might not want to use the new inertia effect. A quick dig around the code reveals that there is now a useInertia boolean property that can be passed in the mapOptions of the map constructor. To disable the inertia effect, create your map as follows:

You can also change the intensity of the inertial effect by setting the inertialIntensity property. If you want to make yourself dizzy, try the following and then give the map a give flick!

It’s almost impossible to make a side-by-side comparison of any other changes that occur between versions – the source code of the control is obfuscated, causing functions and parameters to be renamed with random letters between versions, so z = new function(cB, a) might be exactly the same as A = new function(h, t), but without comparing line-by-line you can’t be certain.

However, a quick examination of the new library does reveal some other interesting things to note:

Of course, you can’t necessarily infer too much based only on the name of a class in the library but, even if these features aren’t exposed yet, it’s interesting to see what might be coming just round the corner…

Last week there were a number of new features that appeared in Places and in the 7 Pack including the inclusion of event information on venue Place pages and pushing the ppc hotel booking feature to the front page. There were several that I did not have time to report on that hit my radar:

Whether a bug or by design, the business email address has been removed from the Places page (thanks to reader Robert Ramirez of localrezults.com). He noted, and I agree, that it is a critical piece of information to have about your business on a page that Google positions as a comprehensive “search result” and its absence is strange.

Another interesting tidbit, particularly amidst the frequent disputes over reviews that have occurred, is that Google is now including links to the major review sites near the top of the listing. From a UI point of view it is redundant as the information is readily available down the page. One can only speculate that its inclusion above the fold was an effort to placate the likes of TripAdvisor and Yelp (and I am sure others).

Earlier this month, we announced the first version of the Blogger app for Android on the Blogger Buzz blog. Today, we’d like to share some tips on how you can use the Blogger app to quickly publish posts when you’re on the go. 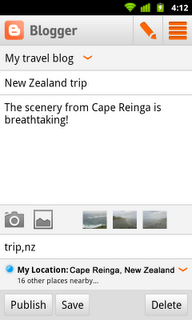 1. Attach photos as you compose
Take photos using your phone’s camera and instantly add them to your post while you draft. You can also insert photos from your phone’s gallery, all within the Blogger app.

3. Share to Blogger
Share videos, products, photos, links and other interesting things you would like to include in your blog via the share button that’s available in many apps, including Google Maps for mobile, YouTube, and your web browser. After you share an item to your Blogger, it will be inserted into new post that’s automatically created for you so that start can composing right away.
4. Switch across multiple Blogger accounts
If you’re an author of more than one blog, you can easily switch between your different accounts by tapping on the orange arrow next to the title of your blog. That way, you can publish articles for each of your blogs to keep your all of your readers up to date.
5. Keep track of published posts and saved drafts
See what you’ve composed in an easy to read list by tapping the list icon located on the top right-hand corner.

We hope that you enjoyed these blogging tips. If you haven’t done so already, you can download the free Blogger app for Android 2.1+ devices from Android Market or scan the QR code below. As always, we would love to hear what you think so please feel free to share your thoughts with us through our feedback form.