Last month, Google lost one of their own when Andria Ruben McCool passed away unexpectedly. Andria was around since the Keyhole days of Google Earth, and she was a a driving force behind the impressive “Crisis in Darfur” layer that Google introduced in 2007.

As a sharp-eyed GEB reader discovered recently, Google has built a simple in-Earth memorial to Andria in the form of a labeled body of water, as shown here: 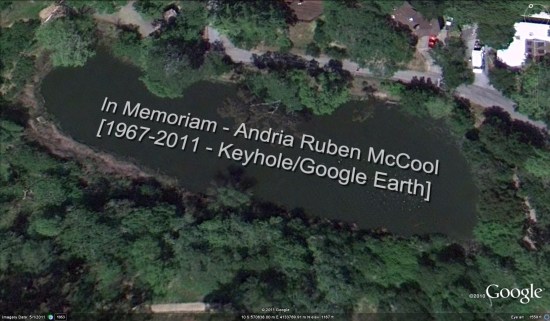 You’ll need to make sure to have “Water Bodies” checked inside of your layers section (Borders and Labels –> Labels) to see the text. Here is a KMZ file

to fly you to the exact location.

It’s nice to see Google honor her life like this, even if it’s a very small token. As far as I know, this the first memorial of this kind in Google Earth.

Due to the usage of non-latin characters in languages like Russian, and our decision to label countries and cities in their native tongue, I’ve always found browsing foreign countries in Google Maps to be quite the educational experience. How else would I have discovered that other languages have such pretty swirly letters? Unfortunately, it’s also quite a frustrating experience when you’re actually trying to find some place in those countries (“Tokyo! SHOW ME TOKYO!! aRrrgghghH!”). Well, thankfully the Google Maps team has now made it easier to have both an educational and satisfying experience with the recent introduction of transliterated tiles for Russia, Greece, Japan, and Thailand.

For users with a browser setting for the native languages of those countries, they’ll continue seeing the tiles with just the labels in that language. But for everyone else, they’ll see tiles with both the labels in the native character set and in the latin character set below it. You can trust the language setting to get that effect in the Maps API, or if you’d like, you can force a particular output in both the Javascript and Static Maps API by appending the”hl” parameter to the script src or image src with the desired language value. Experiment with the various language/country combinations in the example below to see this in action in both the Static and Javascript APIs:

Link to example of transliterated tiles in the API