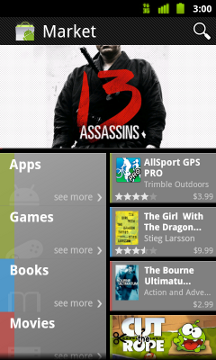 Earlier this year, we launched several important features aimed at making it easier to find great applications on Android Market on the Web. Today, we’re very excited to launch a completely redesigned Android Market client that brings these and other features to phones.

The new Market client is designed to better showcase top apps and games, engage users with an improved UI, and provide a quicker path to downloading or purchasing your products. For developers, the new Android Market client means more opportunities for your products to be merchandised and purchased.

In the home screen, we’ve created a new promotional page that highlights top content. This page is tiled with colorful graphics that provide instant access to featured apps and games. The page also lets users find their favorite books and movies, which will help drive even more return visits to Market.

To make it fun and easy for users to explore fresh content, we’ve added our app lists right to the Apps and Games home pages. Users can now quickly flip through these lists by swiping right or left, checking out what other people are downloading in the Top Paid, Top Free, Top Grossing, Top New Paid, Top New Free, and Trending lists. To keep the lists fresh and relevant, we’ve made them country-specific for many of the top countries.

To help you convert visitors to customers, we’ve made significant changes to the app details page. We’ve moved the app name and price into a compact action bar at the top of the page, so that users can quickly download or purchase your app. Directly below, users can flip through screen shots by swiping right or left, or scroll down to read your app’s description, what’s new, reviews, and more. To help you promote your product more effectively, the page now also includes a thumbnail link to your product video which is displayed at full screen when in landscape orientation.

For users who are ready to buy, we’ve streamlined the click-to-purchase flow so that users can complete a purchase in two clicks from the app details page. During the purchase, users can also see a list of your other apps, to help you cross-sell your other products.

With a great new UI, easy access to app discovery lists, a convenient purchase flow, and more types of content, we believe that the new Market client will become a favorite for users and developers alike.

Watch for the new Market client coming to your phone soon. We’ve already begun a phased roll-out to phones running Android 2.2 or higher — the update should reach all users worldwide in the coming weeks. We encourage you to try the update as soon as you receive it. Meanwhile, check out the video below for an early look.

Almost every developer has an idea and might want to start a company. Where do you start? Entrepreneurs Paul Buchheit, Joe Kraus, and Seth Priebatsch explained how to go from hacking on the nights and weekends to building an investor funded startup. We also discussed how to find co-founders, attract investors, and focus on the key decisions. You can watch the complete Google I/O session on YouTube. Here are some highlights.


Should I have a co-founder? Having strong co-founders join you in transforming your idea into a real company is critical to success. There is a positive correlation between the number of co-founders and successful outcomes up to about four co-founders. Beyond four co-founders there isn’t much data. But having more co-founders on your team definitely improves your chances of success.

What are important characteristics of a co-founder? It helps if you have worked together before, know each other well, have complimentary expertise, and can communicate openly and honestly. Joe Kraus said you should be able to settle arguments with great answers, not the compromise middle position. What else should you look for in a co-founder?

How do you get started? Paul Buchheit knew he wanted to start a company but didn’t know how. So, he decided to join a startup to get some experience. That startup was Google. Paul learned how startups grow, and worked with some great people who would later become his co-founders at FriendFeed. Having experience at a startup earns you credibility with potential co-founders, employees, and investors.

What matters most; team, traction, idea, or market segment? They all matter, but the people on the team are the number one consideration. The founding team shapes the product vision and sets the direction for the company. Potential employees and investors are attracted…or not, by the members of the founding team. The idea matters, but will probably change significantly over time, so most investors don’t fixate on the idea. The market segment is important, but only as a gauge of the range of successful outcomes. Traction from early users or customers makes it much easier to raise money.

How do you find investors? People invest in businesses they understand, or people they know. Look for investors that have started companies in your area, or have invested in similar companies in the past. Talk to everyone you know about your idea. Joe Kraus, co-founder of Excite, tells the story of how he read a book about starting companies, called the author, got introduced to other people, who introduced him to other people, and finally ended up with a $3M investment from Kleiner Perkins, one of the top VCs in the world.

Should you raise money from VCs or Angels? The first consideration is who can help you most. You want more than just money from investors. You want help, advice, introductions to other people who can help, and maybe access to press. Aside from help, it depends on how much money you need to raise. Friends and Family is the best place to start to raise small amounts of money. Angel investors can fund anywhere from $100K to $1M or more. Venture Capitalists (VCs) usually invest $1M to $3M in a first round Series A investment.

Incubators, Angels, and VCs – Seth Priebatsch, founder of SCVNGR.com did all three in starting his company. Seth entered a business plan competition at Princeton…and won. He used that to get the initial product built, and then applied to DreamIT, a startup incubator. That experience at the incubator allowed him to build and refine the product. Next he raised a small amount of money from Angels and brought on advisers to help him grow the company. That led to a small round from VCs. Seth believes the more investors you have, the more help, advice, and experience you get.

How do you arrive at a valuation for the company? Joe Kraus says it is an art, not a science. It depends on the stage of the company, the competition, and how fast the market segment is growing. Most early stage startups don’t have revenue and don’t have many users so the valuation is typically between $1M and $3M, and depends on the experience of the founding team, how much progress you have made on the product, and the relative success of competitors. The best way to determine a fair valuation is by having several competing investors give you proposals.

Do I need a business plan? No, but you do need a good slide deck that explains what you want to do, what problem it solves, why it will be successful, and how your team can execute on the vision. Here is a link to a post that explains how to pitch your company to investors. A good pitch deck and a product demo are what most investors are looking for. Business plans might be useful for helping you refine your ideas and vision, but most investors will never read it.

Are patents, IP, and trademarks important? Paul Buchheit says in most cases they don’t matter for early stage startups. Joe Kraus added, patents might be of some value to a potential acquirer, but probably just as a defense against patent infringement cases. Patents are very expensive to obtain (legal bills) and they take two to four years, sometimes longer, to actually get issued. By that time most startups are out of business, acquired, or moving on to something else. Even if you have a patent, most startups can’t afford to defend them in court against potential infringers. The legal expense of defending a patent, and time lost away from your business, make it nearly impossible for a small startup.