“One day in retrospect the years
of struggle will strike you as the most beautiful.”

Remember… We are The Economy. (That includes you.)

The US Navy SEALS have a creed they live by in their work. A few of our favorite lines are…

What if we all had a Trident for our work – something that says we truly accept the responsibility for our chosen profession – and we did it? 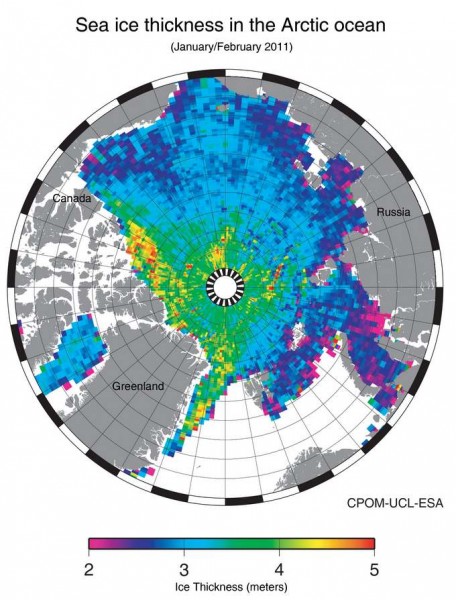 The European Space Agency has released a map of sea ice thickness in the Arctic based on observations by the CryoSat-2 satellite. “CryoSat measures the height of the sea ice above the water line, known as the freeboard, to calculate the thickness. The measurements used to generate this first map of the Arctic were from January and February 2011, as the ice approaches its annual maximum. The data are exceptionally detailed and considerably better than the mission’s specification. They even show lineations in the central Arctic that reflect the ice’s response to wind stress.” There’s also a map of Antarctic ice, but it’s preliminary.

Think about your work (contribution).

Whether you feel lucky or not with what you’ve been given (or earned) as your opportunity to work, you’re ultimately just a steward of it for a relatively brief period in time.

It will be handed off to someone else at some point.

If you thought of that work as being put in a box to be given to someone else, what would you want the recipient to think when they opened it up?

Wouldn’t you want it to be something that’s difficult to improve on?

Wouldn’t you want them to crack open that box… look in… smile… and say… “Wow. That’s great work.”