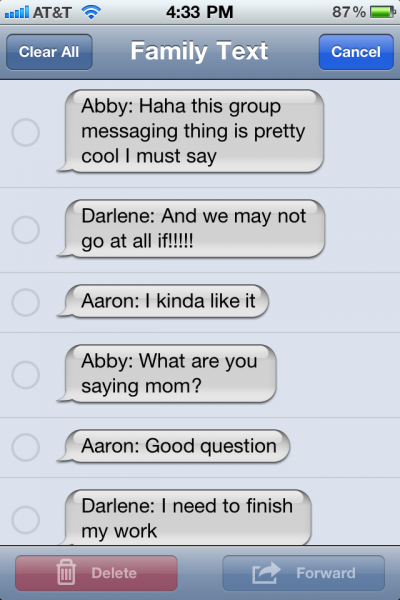 Texting, invented in 1992, has changed little over the past 19 years. In the absence of innovation on the part of the phone companies, a number of companies have stepped in and created this new class of texting product that adds a significant value layer to the basic texting function. Group texting is like adding a party line (for those of you that remember them) to your text messages.

Texting is one of the most personal of communication technologies, it is ubiquitous and typically reaches into the most intimate social circles a user has. It has always been a one to one or a one to many product. Group texting does it one step better and puts any given circle of users into the same context and allows many to many communications through an online hub.

The players in the field, GroupMe, Disco.com, Huddl, FastSociety and Beluga offer up pretty much the same basic functionality of being able to create a new group of texters and an associated voip number via an online interface or a smart phone app. When a message is sent to the group’s unique number by any member, all members of the group receive the message. It is a service enhancement whose value is immediately obvious to even the most technically illiterate user. Group texting allows a group of users (up to 99) to coordinate their activities and/or movements quickly and easily.

To experiment with the technology I created a group for my four family members. To the right you can see their responses. My daughter, immediately upon experiencing it, set up one for her small group of 4 girl friends and has since been using it enthusiastically.

There is a business use case for the technology as well as a personal one.  When I showed it to my brother-in-law, a surgeon in a small practice, he created an account to allow the four doctors in his practice to help communicate hospital call schedule conflicts without the intervention of a secretary/intermediary, an immediate stress and time saver.

Beyond the basic functionality each of the services has a slightly different feature set that differentiates them.

Obviously the big boys think the space is important. Beluga was bought up by Facebook in early March. Disco.com, released at the end of March, was created internally at Google by a group that functions independently of the mother ship.

At the time of introduction, TechCrunch speculated that  Disco.com would stay independent of any social efforts at Google. I see that as unlikely. Any development in a corporation ultimately needs to contribute back. While disco.com might be able to make it as a stand alone product it would be much more valuable if integrated with the likes of Latitude, the new Offers or even Google Voice.  The team that created the product might stay as an independent development unit but ultimately the functionality of disco.com, like Hotpot, offers too much long term value to not bring it back into the corporate fold much.

Ultimately, group texting is a activity that is not only extremely useful to the users but also very social and very local in nature. It reaches into the inner sanctum of our lives and exists where we are the most influenced and are the most influential. If leveraged appropriately, it could offer advertisers an incredible opportunity to understand and participate in those inner worlds. The technology, in adding a layer to a trusted medium, holds up the promise of making the telcos dumb texting pipes and foreshadows them losing out on the value created by the layer. It offers who ever runs the service the best view of our most intimate circle of friends and family, the people that we most trust and love.

My sense is that functionality of group texting is so useful and obvious that capability will soon be everywhere. Who the leader will be is not yet clear.

On Tuesday evening, the Android team was made aware of a number of malicious applications published to Android Market. Within minutes of becoming aware, we identified and removed the malicious applications. The applications took advantage of known vulnerabilities which don’t affect Android versions 2.2.2 or higher. For affected devices, we believe that the only information the attacker(s) were able to gather was device-specific (IMEI/IMSI, unique codes which are used to identify mobile devices, and the version of Android running on your device). But given the nature of the exploits, the attacker(s) could access other data, which is why we’ve taken a number of steps to protect those who downloaded a malicious application:

For more details, please visit the Android Market Help Center. We always encourage you to check the list of permissions when installing an application from Android Market. Security is a priority for the Android team, and we’re committed to building new safeguards to help prevent these kinds of attacks from happening in the future.

Last night at a press event in New York City, Vin Rock (from Naughty by Nature) and I got to preview a bunch of new Microsoft products coming out this year, including some new builds of Windows Phone 7.