In May we announced Google Wallet—an app that makes your phone your wallet—with Citi, MasterCard, Sprint and First Data. With Google Wallet, you can tap, pay and save using your phone and near field communication (NFC).

We’ve been testing it extensively, and today we’re releasing the first version of the app to Sprint. That means we’re beginning to roll out Google Wallet to all Sprint Nexus S 4G phones through an over-the-air update—just look for the “Wallet” app. Here’s a demo of Google Wallet in action:

When we announced Google Wallet, we pledged a commitment to an open commerce ecosystem. We appreciate Citi and MasterCard for being our launch partners. And today, Visa, Discover and American Express have made available their NFC specifications that could enable their cards to be added to future versions of Google Wallet.

Our goal is to make it possible for you to add all of your payment cards to Google Wallet, so you can say goodbye to even the biggest traditional wallets. In fact, we’ve got a video of our first customer, someone who is ready to replace his famously over-stuffed wallet. We hope Google Wallet gives him “serenity now.”

This is still just the beginning and while we’re excited about this first step, we look forward to bringing Google Wallet to more phones in the future. You can learn more about Google Wallet at google.com/wallet. 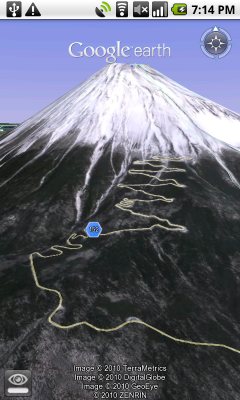 Google Earth on the mobile platform was first released for the iPhone in October 2008. It was very popular (and continues to be so today) thanks to being able to move and zoom with the touch screen, and the beauty of the imagery on high resolution smart phone screens. But, the new app would not let you see much in the way of map information – very little KML content was made available, and you couldn’t load KML files. Even so, most of us were just thrilled to see such a cool 3D app on a phone at all, so we weren’t too disappointed.

There weren’t many updates to the mobile application until Google Earth for iPhone 2.0 was released in November 2009. Before 2.0 was released Google had added some new layers you could see in Google Earth (like photos, roads, and Wikipedia placemarks). But, you couldn’t load KML files – only view the Google Earth terrain and imagery and the built-in layers. Google finally added an ability to add some KML content indirectly in the iPhone 2.0 version by allowing you to load maps you had saved in My Maps. But, only certain basic KML content was viewable. There hasn’t been a big update to the iPhone version since since 2009.

Early last year, with the introduction of the Nexus One, Google released Google Earth for Android. It had some differences from the iPhone version, including some support for GPS following. But, it also did not support KML content. A few updates to the Android came out in 2010, including version 1.1 which added the Ocean layers and undersea 3D terrain. But, you still can’t load KML content on the Android platform.

Even without more features, Google Earth is already one of the most popular apps on smart phones and tablets like the iPad (see ten must have apps for the iPad). 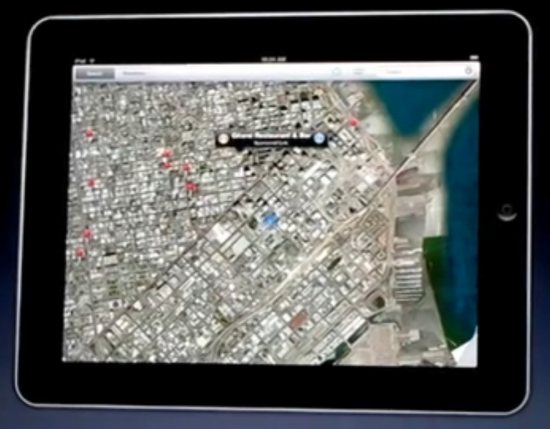 With the introduction of the new wave of tablets coming out this year (e.g. the Google/Motorola XOOM with Android 3.0/Honeycomb and Apple iPad 2), we are going to see new CPU horsepower (and 3D horsepower) made available. These computers will actually be more powerful than many desktops that run the full desktop version of Google Earth. There’s no reason I can see that tablets couldn’t run a more fully capable Google Earth application (besides the need for it to be ported to the iOS and Android operating systems). Since Google Earth already runs on Linux, Mac OS, and Windows – I’m sure Google could make a porting of the app happen!

We would like to see Google Earth on tablets take full advantage of the built in features – better UI features for the touch screen; take full advantage of built-in GPS, compass, gyro, and accelerometers (imagine flying the flight simulator using those features!); better features for recording GPS tracks and showing your position during travels. Not only that, but features from the desktop version such as: measuring distances, adjusting mapping routes, historical imagery, time animations, and interfacing with Google Maps should be included. And, it’s even more critical to have the offline capabilities of Google Earth on mobile platforms like a tablet. Most importantly, you should be able to load any KML content on a tablet just like on a desktop – including network links (which enable live content such as weather and real-time position updating). I’m certain the tablet platforms can support most of the capabilities of the desktop client. Google just needs to port the app to those operating systems.

While we’re on our soapbox pleading for new features, there’s one new feature Mickey and I have been discussing that needs to come to Google Earth regardless of OS (but, especially if you have more KML capability on the tablets and/or mobile platform). Google should support the ability to put your “My Places” content (the content you want to be there when you load Google Earth) up into the cloud. Whether its stored in your Dropbox, or maybe Google Docs – you should be able to point your “My Places” to a file storage space on the net somewhere. That way when you move from one system to another, you can point Google Earth at your centrally located “My Places” content and have your favorite content (and other GE settings) always available.

So, consider this our vote for Google to port the full Google Earth capabilities to the mobile tablet platforms. I hope most of you other Google Earth lovers will agree that you’d like to see this happen for your upcoming tablet acquisition. Because, it seems like there’s going to be a lot of people with tablets in the not so distant future.

Last week we announced Nexus S, a pure Google phone. With a brilliant 4” Contour Display, a 1GHz Hummingbird processor, the latest Google mobile apps and Android 2.3 (Gingerbread) pre-installed, we’re excited about getting this great device out there.

We’re pleased to announce that starting today, this phone will be available for sale through Best Buy and Best Buy Mobile stores across the U.S. and online. The phone is sold unlocked and can be bought for $529.99 without a service plan or for $199.99 with a T-Mobile service plan.

Can’t make it to a store? Order online now through Best Buy. By the way, some of our old friends also can’t wait to get their hands on a Nexus S!