Thanks to sharp-eyed GEB reader ‘Jorge’, we see that Google has just released some fresh imagery into Google Earth! 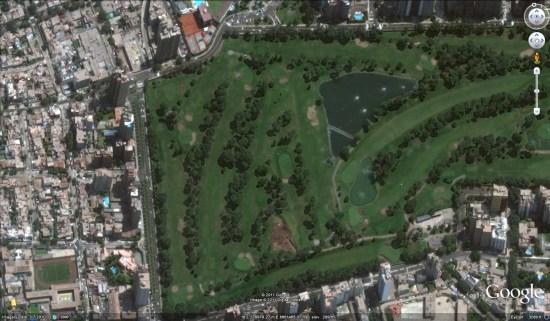 We’re in the middle of college basketball Madness here in the U.S. and the best is yet to come. Tomorrow night, the Kansas Jayhawks will play the Richmond Spiders in a Sweet Sixteen match-up at the Alamodome in Texas. I’ll proudly admit that I’m a Kansas fan and hoping to see my home team make it to the Finals. But I’m not the only college hoops fan at Google. In fact, our Geo team put together a special page that shows an up-to-date schedule with schools and stadiums.

In our latest imagery push, we (coincidentally) added new imagery of Lawrence, Kansas and a new 3D model of the Allen Fieldhouse, possibly the best basketball venue on Earth. As a longtime Lawrence resident and KU alumnus, I still remember my first games in the “Phog” when I was in junior high school, watching from the upper bleachers. The Fieldhouse has aged well with the new Booth Family Hall of Athletics and the parking additions. 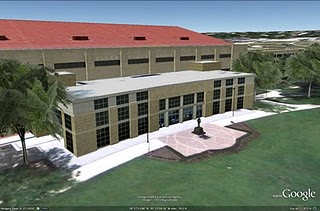 When I’m feeling like I need even more of a dose of home, it’s also great to be able to check out some of my favorite places back in Lawrence through Google Earth and Google Maps. With the new high-resolution aerial imagery, you can now see many changes including the updates to Memorial Stadium and the large practice fields. 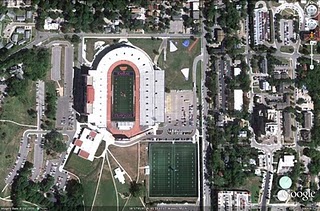 Additional basketball-related updates include Gainesville (Florida), Tallahassee (Florida State), and Manhattan, the Little Apple (Kansas State [5]). We’ve also updated many other locations around the world that can be seen and discovered in our latest batch of published imagery including major updates in Sydney, Tokyo, Stockholm and significant parts of Ireland.

These updates are now available in both Google Maps and Google Earth. To get a complete picture of where we updated imagery, download this KML for viewing in Google Earth.

Since it’s February, love is in the air and romance is on people’s minds (I mean, why stop at Valentine’s Day). And when it comes to all things amatory, no features and locations conjure up those feelings better than châteaux, castles, and royal wedding sites. Lucky for all our quixotic Earth and Maps users, we’ve got all that and more in our latest batch of published images.

Let’s start with the big one in the room. The Royal wedding isn’t until April, but we’re getting ready for the big day by updating London, UK and wedding-related sites with high-resolution aerial imagery acquired this past June. In the image below, you can see the site of the royal wedding, the Collegiate Church of St Peter at Westminster, more commonly referred to as Westminster Abbey. While viewing this site in Google Earth, make sure you turn on the Photos Layer, and check out the several pano360 immersive images that dot the church confines.

Let’s move west a bit to the beautiful Emerald Isle. Below we’re looking at Trim Castle and adjacent grounds in the county town of Trim, in County Meath, Ireland. The castle is the remains of Ireland’s largest and dates to the 11th century. As with the Westminster Abbey location, make sure to click on the Photos layer and check out the pano360 images; the immersive images include 360° views of the castle interior.

Lastly, let’s take a look below at some new aerial imagery of a section of the Biltmore Estate which contains the châteauesque house, the Biltmore (upper-right section of the image). The house was finished in 1895 and is located near Asheville, North Carolina. It is the largest privately-owned home in the U.S., owned continuously by members of the William Vanderbilt family.

Do you have a place you love that you’d want to receive notification from us when the Earth and Maps Imagery team updates your beloved site? We’ve got just the tool: The Follow Your World application!

These updates are now available in both Google Maps and Google Earth. To get a complete picture of where we updated imagery, download this KML for viewing in Google Earth.