If you live in the northern hemisphere then the time and fruit is ripe to put on your foraging cap. I’ve been picking and cooking & baking with this year’s blackberry crop for about a month now. If you want to know where you can find your nearest fruit trees and edible plants then these Google Maps should be able to help:

Concrete Jungle – Your Google Maps based guide to wild food sources in the Atlanta area.

Boise’s Urban Foods Map – If you live in Boise then consult this Google Map to find your nearest foraging locations.

Neighborhoodfruit is a crowdsourced map of fruit trees on public land in the U.S.. It is possible to search the map by zipcode.

Forage.rs is a collaborative map of edible and useful wild plants worldwide. Plants added to the map are linked to information about how they can be used, including photographs, stories, and recipes added by users.

Urban Edibles – a collaborative map of wild edible plants and fruits in Amsterdam.

Mundraub – showing you where you can pick free fruit and vegetables in Germany.

As the summer heat descends on the Northern Hemisphere we thought we’d release our newest App Engine version with some changes that are sure to keep you playing around in the cool, air-conditioned indoors (hey, you don’t want your computer to overheat, right?).

Lastly, we have some exciting news related to the experimental Go runtime. While it still remains experimental, starting with 1.5.2, all HRD apps will have access to the Go runtime in production.

As always, there are also some small features and bug fixes, the full list of which can be found in our release notes (Python, Java). We look forward to your feedback and questions in our forum.

A few weeks ago, South Sudan became the 193rd country on the planet, but that wasn’t reflected in Google Earth until now. Stefan at Ogle Earth made some interesting comments about it when the new country was introduced, including:

• Why wasn’t Google ready for it from day one?

• What will they do about the disputed border areas?

They delay may have been so Google could sort out the border issues. As Stefan suggested, Google has included a red border on parts of the country to indicate the disputed borders, as seen here: 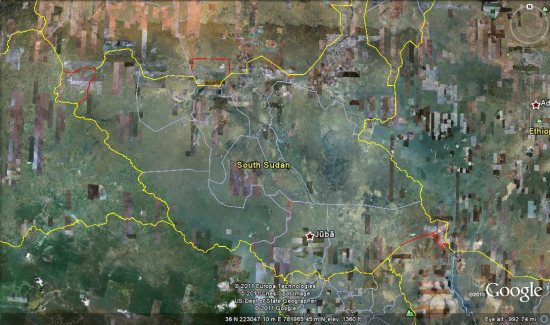 The red area on the center of the northern border of South Sudan is Abyei, which right now belongs to both Sudan and South Sudan. However, I’m not sure of the story on the red disputed area along the western border.

To see the new country for yourself, simply search for “South Sudan” in Google Earth and it will fly you directly there.