Google has upgraded the Photos layer in Google Earth to not only include the millions of geo-tagged photos from Panoramio, but also to include 360 degree panoramas from 360cities.net. The 360 photos were previously viewable in Google Earth if you opened the Gallery layer folder and turned on the 360Cities layer. But, now everyone can find the panoramas with the default Photos layer. The regular 2D photos still appear as little blue icons as you zoom into a place. Now, if 360 panorama photos are available for that place, you will also see little red square icons as well. Click on a red icon and you’re presented with a 2D view of that location in the pop-up window and you can click the photo to fly into the 360 panorama right in Google Earth. 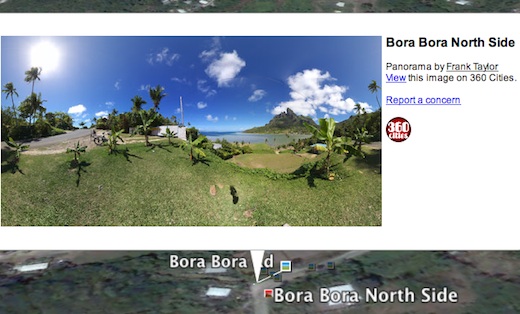 I’m a big fan of 360 panoramas which give you a full immersive experience of a photo location – you can look in all directions, including up and down. During our first year of the Tahina Expedition I have produced many 360 panoramas of places in the Caribbean, the Panama Canal, Galapagos, the French Marquesas, Bora Bora, Tonga, and more (see recent 360s of Tonga, see all of the panoramas for Tahina Expedition). Now everyone can find 360 photos like these, and those done by thousands of photographers around the world right in the Photos layer.

I’m thrilled to see 360 panoramas, and 360Cities.net, get more visibility. Jeffrey Martin, who started 360Cities, says that there are more than 60 thousand 360 images in the new Google Earth layer. Congratulations Jeffrey! Kudos to Google for making these photos more accessible! I hope they’ll take the next step and add them to the Photos layer in Google Maps as well.

First Nicaragua invaded Costa Rica, then they acted like a jerk, and to wrap things up they blamed Google Maps.