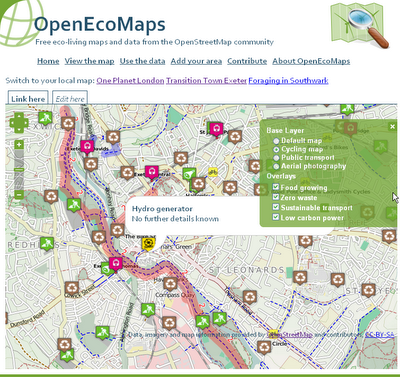 There are lots of community groups, councils and companies out there mapping allotments, renewable energy generators, cycle routes and more. But they all suffer from two shortcomings:

1. Duplication – by putting their work into different places, different maps, we’re duplicating effort and not benefiting from each other’s work. For example, it’s common to find several different people all trying to map food growing spaces in the same part of town. Why not share?
2. Tools – not everybody has the tools to map these things, to put the results onto their web site or provide it to their council in the correct format.

OpenEcoMaps encourages people to share all their data in the same place – OpenStreetMap – and makes it easier for you to make use of the results.
How does it work?

OpenEcoMaps takes the data from OpenStreetMap (published under the Creative Commons Attribution-Sharealike 2.0 license), a community that is mapping the whole world and providing all of the information as open data. It takes a fresh data extract every hour and turns it into reusable KML Files, which can easily be displayed on a map.

We’ve talked before about Gigapixel images and 3D Panoramas, but it’s not often that the two come together.

For the past year, Thomas Hayden has been shooting gigapixel-quality 3D panoramas, and the quality is stunning. For example, this KMZ file

takes you to OMSI (Oregon Museum of Science & Industry) in Portland, OR. Be sure to turn on the “360Cities” layer under the main “Gallery” layer.

He has recently completed shooting a 42 image set virtual tour of the museum using a GigaPan that allows him to capture very high resolution panoramas. While most GigaPan images you see these days are multi-GigaPixel “framed” panormas, he specializes in almost completely spherical location coverage. These are as high resolution as many popular gigapan images, an order of magnitude higher resolution than the standard methods for virtual tour photography. The standard methods compose a 360 from 5 or 6 individual photos, while he composed these using 112 to 126 individual 8 MP images. The average size of one of his 360s is around 220 MegaPixels (.2 GigaPixels). This resolution allows the viewer to zoom in on very fine details, and in the case of the Manuevering Room of the USS Blueback fast-attack submarine on exhibit at OMSI, allows the viewer to examine the switches, dials, and gauges that move the boat. 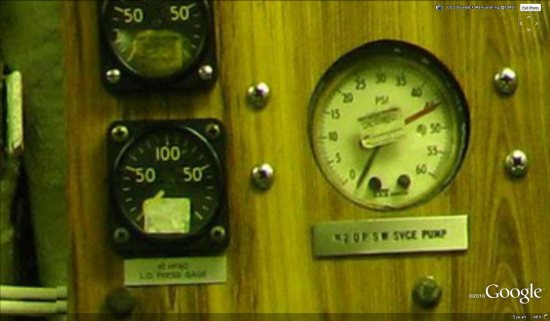 . He has also built a Tumblr blog

that serves as a day-by-day trip report and a place to display the media. The imagery from the Grand Canyon is absolutely stunning: 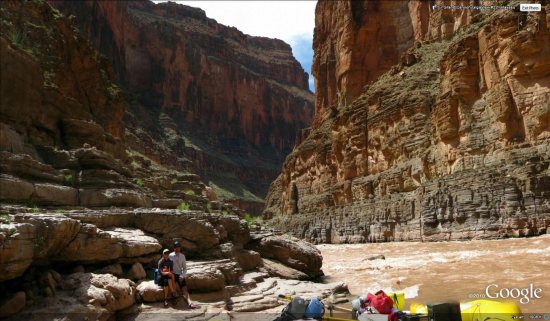 For those of you interested in the specifics of how he was able to capture the imagery for these panoramas, he’s explained his equipment in detail:

The equipment I use is half of my story, actually. I generate these images with a five year old, low end, prosumer camera (Canon Powershot S5 IS 8MP) and a GigaPan Epic 100 robotic camera mount. The GigaPan unit is designed to handle almost any brand of point and shoot camera, and together with software, become a high resolution imaging device. The concept spun out of NASA’s Mars Rover Missions where they needed small cameras (low power, light weight) to do great things. The primary resource they knew they would have on Mars was time, so the created this process for turning low end cameras into useful imagers by compositing back on earth. With money from Google, Carnegie Mellon University started the program initially with National Geographic and NASA called the Global Connection Project, which spun out into a company called GigaPan Systems to produce and market an affordable robot+software package that would make thise kind of imaging within reach of the average consumer. In the last year, GigaPan has also produced a beefier unit to manager larger DSLR prosumer cameras and their telephoto lenses.

My Grand Canyon GigaView project is not-for-profit and GigaPan supported the project by providing the Epic 100 I still use today. NRS supplied me with whitewater gear and PNY supplied me a all the SD cards I will ever need, so I had some sponsorship. I was invited on the Grand Canyon Private River Trip permit that my old raft guiding buddy had won last year in the newly formed private permit lottery system that GCNP devised in 2007 to deal with the 25 year waiting list that had become the average wait for a private rafting permit. Because I used to guide and have many friends in the river communities of the Colorado Plateau, this was my second opportunity to row a boat down the Grand Canyon through 225 river miles, 182 named named rapids, and 3 of the largest drops in North America.

Most of the images are inner canyon landscapes, but when there are people to be found in them, they are usually my fiance and I posing on a overhanging ledge or peering around a bush to see if the GigaPan had finished shooting yet, only to get caught by the robot. 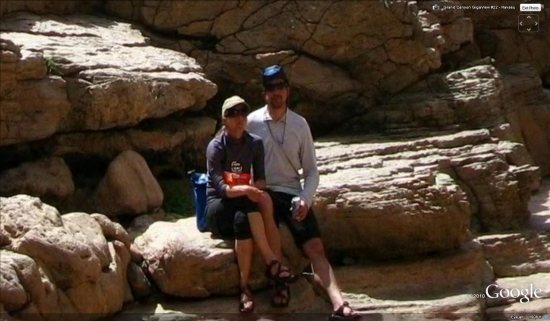 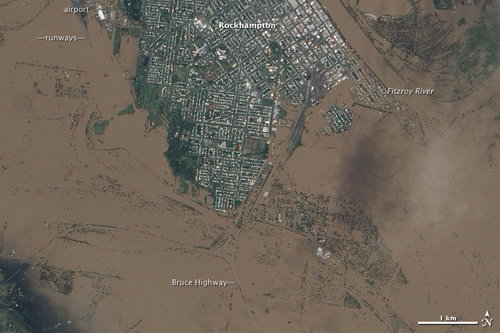 NASA’s Earth Observatory has a number of high-resolution satellite images of the floods in Queensland, Australia.

Nearmap managed to get an even closer look at the flooding, with two-centimetre-resolution imagery taken on January 13 and 14. ABC News (Australia) has a very neat infographic where you can slide between photos of the flooded areas and photos taken before the flooding. Flood imagery is available directly on Nearmap’s website, where you can select aerial imagery by date for comparison. More on the Nearmap images from the Brisbane Times. Via Google Maps Mania, @HodderGeography and Slashgeo.

Via Google Maps Mania: Above Photography’s aerial photography of the floods.

Google also has some map resources. Some links from Google Maps Mania.