It seems that the newest blackhat playground of user generated input annoyance is the “Place is permanently closed” radio button in Google Places. I have been receiving an increasing number of complaints from readers that are seeing the flag. In fact Barbara Oliver Jewelry and Andrews Jewelers both experienced the dreaded yellow highlight on their Places Pages over the past week shortly after they were hit with competitor review spam. Apparently the flag is generated both by algo and humans but there appears to be an uptick in its use as competitors (and their blackhat proxies) face off in Places. 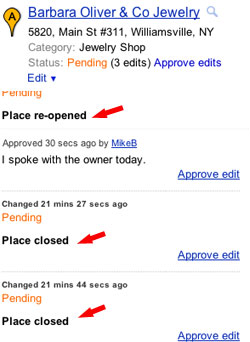 Until Google steps in and either changes the procedure or eliminates the option, there is little to be done to prevent someone from repeatedly flagging your listing and bringing the flag to the fore. If they have access to multiple IPs it can occur multiple times in very short order. I presume if the status is left as is, the listing will eventually fall from the results although just the flag alone is likely to diminish user calls to a business.

The only current remedy is to keep an eye on your listing and as soon as the “Reported to be closed” flag appears report via the “Not True?” link while logged in as the owner of the listing that it is in fact open. Then immediately head over to MapMaker and approve your edit and the flag will instantly disappear. The problem is that a motivated spammer, using multiple IPs and sock puppets can keep you hopping and it isn’t clear that Google will automatically put an end to the tomfoolery.

Like  community edits before, this problem demonstrates the vulnerability of a listing to  blackhat spamming activities in the form of community input. It also dramatically points out why Places should offer every legitimate claimant an automated business owner feedback mechanism that alerts them to major changes to the listing and to new reviews. It gets old very quickly sitting vigil over a listing being repeatedly hit with this absurdity when Google could easily send out a notice on a claimed listing.

Yam Regev has pointed out several new navigation capabilities on a business’s Place page that allows users to more easily move through a list of Places returned from a Google Maps search result. The feature is only visible when a Place Page has been accessed via the list view resulting from a Map search and is currently not visible if a Places page is accessed from the main search results page or via Places search. The feature is visible in both UK and the US and possibly more widely.

It is not clear if it is a test or permanent or will be rolled out beyond the Map results view (click to view larger):

Reader Matt Feldman of Yelo.us has pointed out a new feature in Places where Google is now integrating venue events into their Places Pages. It allows an individual to add the event data to their personal Google calendar and to “invite friends using the ‘Add to calendar’ link that appears alongside the event”.

Google has confirmed that they are adding these events to venues “in a few major cities across the globe, including New York, San Francisco, London, Paris (and others)” and this “information is based on data from rich snippets markup“.

Wcities and Zevents events use the RDFa based Open Graph data structure. Other events appearing on the National Museum of the American Indian Places page from NYC.com are sructured with the event microformat (vcard) formatting. Although it does not seem to matter which format you are using, if you are operating a local site that includes events and you want your event information included in Places, you should be formatting the data with rich snippets. 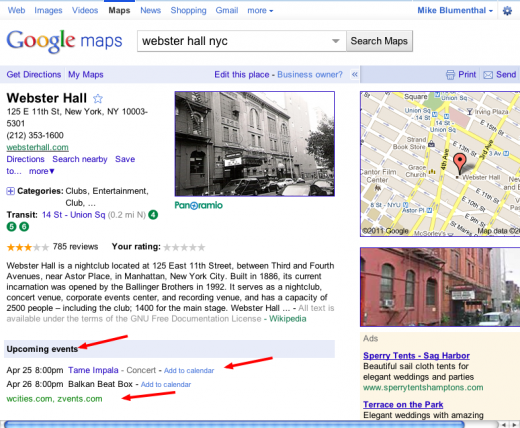