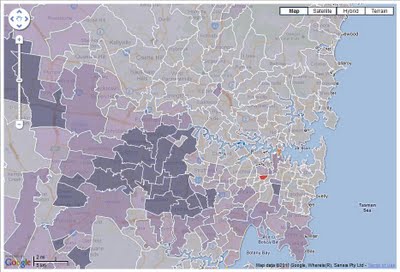 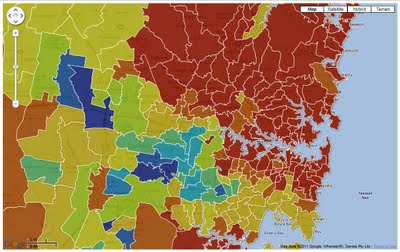 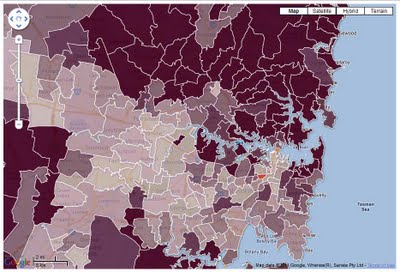 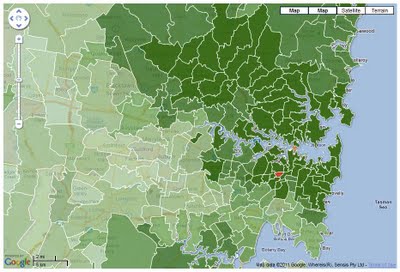 Highlight the map area of interest by search. 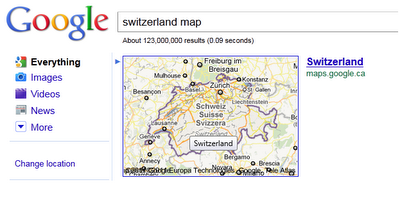 Useful for Countries, Administrative, City Limits and even Islands.

Great for people who are looking but don’t necessarily now the shape or administrative regions Zipcodes in the US, Postal Codes in Canada (but not UK postcode sectors).

Google are testing a highlighting method for the users search

London (Westminster London) is automatically highlight when users do a search on google.com

There is a significant level of interest in postcodes as a convenient reference to locations because of perceived ease of linking them to information about individuals and businesses alike. Over the years postcodes have been put to a wide range of uses in analysing and publishing social trends and population statistics as well as in defining sales, service, franchise or dealership areas. Unfortunately, a misunderstanding of what postcode really is, resulting from a widely held belief about its value as a uniform referencing system, can cause many troubles for the unwary users. This article is a guide for all potential users of postcode boundary data.

Firstly, some facts about postcodes, from Australia Post site:

Please note, the above holds true most of the time… but there are exceptions. It is also important to note that there are 3 types of postcodes: delivery areas, post office boxes and large volume receiver. Only delivery areas have meaningful reference to locations “on the ground”.

Australian Bureau of Statistics publishes in 5 year intervals a set of Postal Area boundaries that are compiled using outlines of Census Collection Districts. They approximate official Australia Post postcode coverage areas at the time of publishing. These boundaries are available for free download in a range of popular GIS data formats. The next update of the data will be released in December 2010.

A number of private companies also produce and regularly update their own versions of postcode boundaries which are available for purchase. The two major suppliers include MapData Sciences (currently ESRI Australia) and Pitney Bowes (formerly MapInfo Australia). There is also a number of smaller operators that may be a source of free or inexpensive information on postcodes, such as aus-emaps.com which genaralises and converts ABS postcode boundaries to KML format for use with Google Map and Google Earth and supplies large format static maps in PDF format for printing. Other small suppliers with a variety of postcode related products and maps include: mapmakers.com.au, findmap.com.au, cartodraft.com.au and ausmaps.com.

1. Changing Postcodes
Postcodes are changing over time due to evolving operational requirements of Australia Post. Changes include additions of new postcode numbers and deletions of old ones from the list as well as adjustments to composition of postcodes by adding or removing localities. This is especially the case with new, dynamically growing areas as well as some rural locations and is less of the issue for established metropolitan areas.

It means that postcodes are not a stable spatial reference. It is ok to use them as a snapshot of a particular point in time, but what often happens is that the attribution to “what area constituted that postcode X years ago” is lost from the supporting documentation and important facts can be misinterpreted by future users of the information.

This is a real problem for researchers of social trends – those who insist on using postcodes as the main location reference. As well, it may cause some legal headaches if postcodes are referenced in contracts for supply of services or franchise areas, etc. Postcodes were never meant to be used in this fashion!

2. Changing definitions of localities
On top of changes that are undertaken from time to time by Australia Post, there are also changes to boundaries defining localities which are implemented by State and local authorities. What was locality X in 2007 may now be split into locality X and Y. As the result, it is very difficult to maintain timely and consistent reference of postcode numbers to “what is actually on the ground”.

3. Imperfect procedures of referencing postcodes to localities
Where possible, Australia Post references postcodes to officially gazetted localities but localities are determined by State land agencies and boundaries are recommended by local councils. This process is not coordinated from end to end and sometimes it gets out of sync. Take for example postcode 3478 in Victoria. Australia Post lists Medlyn as a locality included in this postcode (June 2010 edition) yet this locality is not on Victoria’s register of gazetted locations. Referencing postcode numbers to localities is not a science and there can be inconsistencies.

If you must use postcodes, please consider the limitations outlined earlier as well as the following recommendations to avoid potential problems:

If you intend to match postcodes to official ABS statistics:

If you intend to use postcode outlines to define custom areas:

If you are relying on postcode boundaries from commercial operators:

In conclusion, although postcodes appear to be well recognised spatial units for referencing locations, the complexity associated with accurate delineation of postal boundaries greatly diminishes their usefulness. If you can, avoid using postcodes! If you can’t, be aware of all the limitations, especially when drawing conclusions with far reaching consequences.