Today we are announcing the number of updates that have been made to the Bing Maps Account Center, Bing Maps REST Services and the Bing Maps MSDN documentation.

The new updates in the Bing Maps Account Center make it easier to maintain your location data sources through the account center without the need to have to re-upload your entire data source.

The latest updates to the data source management tools allow you to:

Edit a Data Sources Schema. You can now edit the schema of data sources that are already uploaded to the Bing Spatial Data Service. You can add a new property field or edit the data type of an existing field. This saves you the time of having to re-upload your complete data source.

Besides updates to the data source management tools you also now have the ability to:

Experience Improved Performance. Several performance enhancements have been made to the service to allow for an improved user experience. In addition several bug fixes were included which helped to not only improve performance but also improve the stability of the service.

The Bing Maps REST Imagery Service has had an additional parameter added to it that now allows you to generate static map images with the pushpins de-cluttered. To use this new feature simply add one of the following to your REST call: “declutterPins=1” or “dcl=1”

Here is an example with de-cluttering enabled: 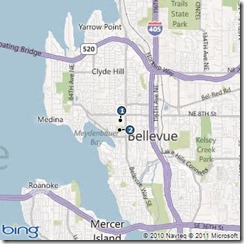 Making the same request but without enabling de-cluttering would return the following: 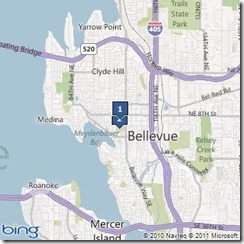 There have been a number of new useful articles added to the MSDN documentation on Bing Maps. Code samples were added the Bing Spatial Data Services Query API that show how to use the query API in C# and VB.

Last fall we released V7 of the Bing Maps AJAX control. This control is a complete redesign of the previous versions. This was done to make the map control smaller and faster. How much smaller and faster you ask? V7 is 1/3rd the size of V6.3 and renders up to 3x faster. As a result we can load much more data into the map than we ever could before.
So how did they do it?
The new architecture of V7 is a modular design which means functionalities can be built that plug into the map control to add functionality without having to include that functionality in all of our applications. This improves on V6.3 as this means that we can create applications that only load in the functionalities they need and not all the functionalities that are available. A good example of this is the routing functionality in Bing Maps. This is a key functionality in a lot of locator based applications however if you were to create an application that displayed business intelligence information on the map you likely don’t need this functionality, so why should you have to download it.
So what does this mean going forward?
It means that we can create blocks of reusable code of key functionalities that can be easily plugged into our applications. Once a modular plugin is created it can be reused again in the future to speed up develop. This is very similar to jQuery plugins. This article will give an overview of what client side clustering is and show how to implement the client side clustering modular plugin for Bing Maps v7 that I’ve made available here.
What is Client Side Clustering?
Often we want to load a lot of data on the map, for example if you were a real estate company you would likely want to load up all the properties that matched a user’s search. This could potentially be a couple hundred, if not thousands of results. If you are zoomed in close to the map it will be pretty easy to identify each location on the map, but if you zoom out the pushpins will likely overlap and the map will become cluttered. Here is an example of 1000 pushpins that are unclustered: 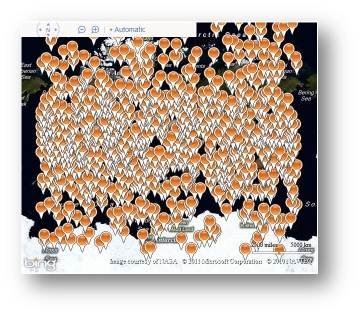 Clustering is the process of grouping closely positioned locations together and representing them with a single pushpin. When you zoom in those locations will become further apart and will separate into their own pushpins. The client side part of “Client Side Clustering” is clustering the data on the fly in JavaScript rather than going back to the server to request more data. When you have a few thousand or less location to display on the map client side clustering can be significantly faster than server side clustering and also cuts down on request to your server thus making your application more scalable. Here is an example of the same 1000 pushpins from before being clustered: 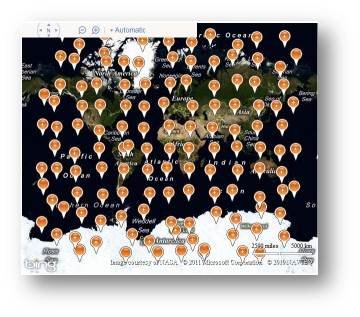 Background on Client Side Clustering and Bing Maps
In the fall of 2008 I had put together an MSDN article on Client Side Clustering in V6. This article became very popular but required a lot of coding to implement. As a result of client demand Microsoft made this a built-in feature in V6.3. With the redesigned V7 Bing Maps control client side clustering is no longer a built in functionality. The client side clustering algorithm used in this article and provided in the sample code is an enhanced version of the algorithm in the MSDN article. This new algorithm has been optimized for performance and designed for easy reuse. It is recommend for use with data sets of 5000 locations or less.
Grid Based Clustering
Both algorithms use what is called grid based clustering. Grid based clustering consists of breaking the map view into a grid with evenly sized cells. Locations are then grouped into the grid cells in which they fall in. If there are more than one location in a grid cell then this is a cluster and is grouped together, otherwise a single location is displayed. Using Bing Maps the following approach is used to cluster data;
1. Determine the size of the map.
2. Use the size of the map and the gird size to determine the number of cells needed to fill the map view.
3. Create an empty array that has the same number of grids cells as calculated in step 2.
4. Loop through the data and do the following:
a. Calculate the pixel coordinate of each location.
b. Determine if pixel is within the bounds of the map.
c. If location is within the bounds of the map, calculate the grid cell key that it falls in and add it to that cell in the array created in step 2.
5. Loop through all cells in the array created in step 2 and do the following:
a. Determine if there is only one location in a cell and if there is then create a pushpin for that location.
b. If there is more than one location for a cell then calculate a location to position the cluster and generate a clustered pushpin.
c. Add pushpins to the map.
Representing a Cluster
When representing cluster with a pushpin a coordinate needs to be used. In the code I have provided there are three different ways to do this. The first method is to calculate the mean average coordinate of all the locations in the cluster. This gives a weighted position that most accurately represents the cluster; however it requires the most processing out of the three methods. The second method consists of representing the cluster by adding a pushpin to the center of the grid cell. This is less significant than the mean average positioning method but is a common method to use as it requires less processing. The third method is to use the location of the first location in the cluster. This ensures that the clustered pin falls on at least one location in the cluster and requires the least amount of processing power.
Implementing the Modular plugin
The client side clustering modular plugin consists of a class called ClusteredEntityCollection that wraps the EntityCollection class. This class will only work with point based data. One requirement is that all data objects that are passed into this class must have a Latitude and Longitude property. When initializing a new instance of the ClusteredEntityCollection class a reference to a map and an object containing clustering options are passed in.

During initialization an instance of an EntityCollection is created and added to the map and a viewchangend event is attached to a clustering function. Below is an outline of the modular ClusteredEntityCollection class. Additional methods and logic are added to this class to make this a complete solution. 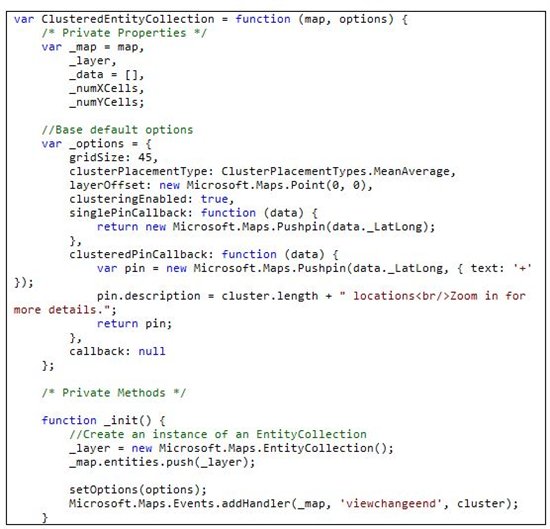 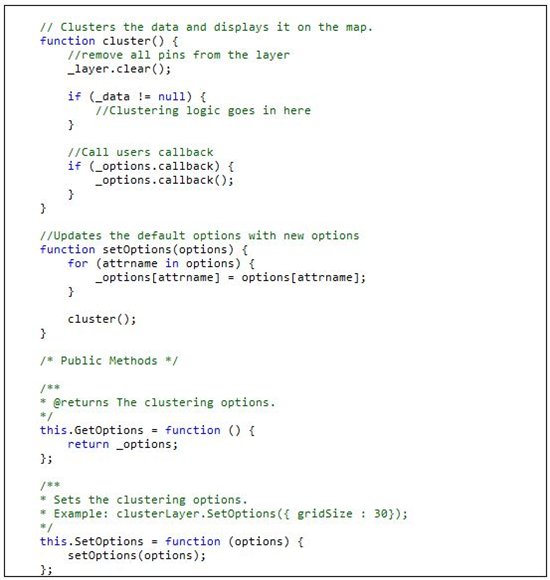 The original clustering algorithm created for v6 of Bing Maps had the logic to create the pushpins within the algorithm. This meant that if you wanted to modify this logic you had to modify the code for the algorithm. To make this new algorithm more flexible two callback functions can be set as options; singlePinCallback, andclusteredPinCallback. These callbacks are used to generate pushpins for the layer, thus separating the logic of creating the pushpins from the clustering algorithm. This makes it easy to have multiple clustered layers that all render data differently. The following is an example of how the options for creating pushpins can be created:

Here is a list of all option properties that can be passed into the ClusteredEntityCollection class.

To increase the usability of this class a number of public methods have been added. The following is a list of all the available methods and a description of what they do.

The following is an example of a basic implementation of the ClusteredEntityCollection class. 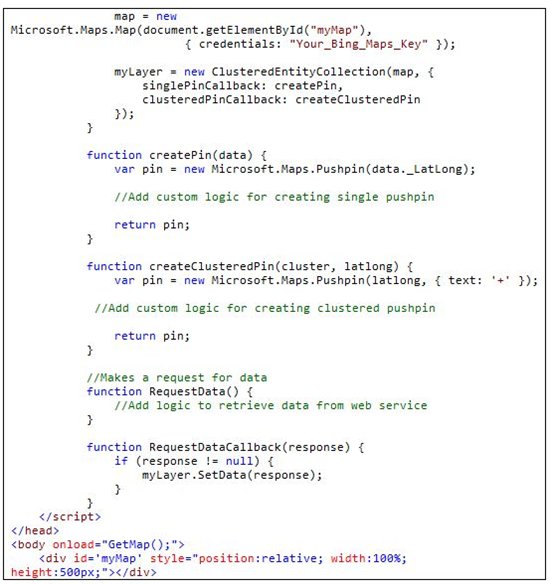