We’ve seen sites in the past the collect various placemarks to view in Google Earth, giving you quick access to interesting sites around the world. Searthing.com is similar to some of those, but with a focus specifically on artist-looking imagery.

Searthing was created by Mack Lazarus and Tim Schmauch, who are behind the similar EarthArtWorld.com site. The two site both focus on artistic-looking imagery, but Searthing is designed in a blog format to show off much more of it.

With that in mind, here are some of the great places that they’ve uncovered: 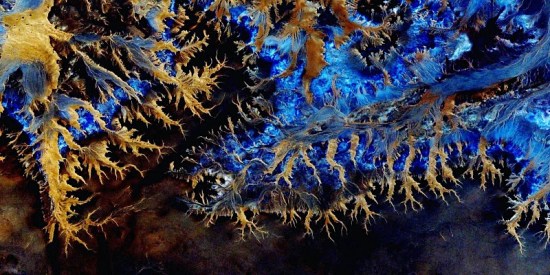 The images are stunning, but there’s a minor problem — most have no context to go with them. No maps, no KML, just an image. Fortunately, they’re working on adding that kind of functionality to the site, and some are already complete. Here are a few examples of items that are shown using the Google Earth Plug-in:

Ultimately, it might be best to do a hybrid of those ideas. Show users a static image so that it loads quickly, but then offer them a view via the plug-in and/or a downloadable KML file so they can explore further.