We’re excited to announce access to an experimental service which can automatically derive street vector data from Bing aerial imagery. Simply put; this means you can derive the position and curves of a road by specifying the end points. Here’s a simple video to demonstrate what’s happening;

We’re looking forward to see what the developer community does with this, especially editors of OpenStreetMap. You can find the service and documentation here. Let us know how you like it!

OK, sure — there is a rush to blog the news. Steve Coast joined Bing. But leaving it at just that news misses the whole point of what Bing/Microsoft wants and why Steve would go join the Bing Maps team. 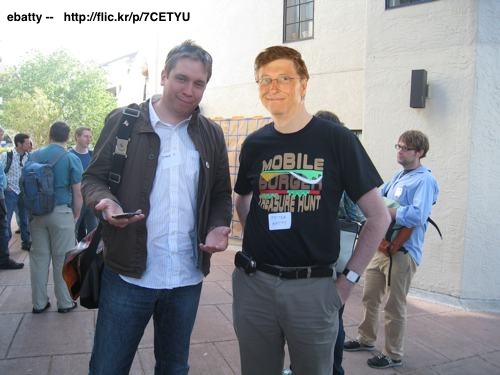 One benevolent dictator for life welcomes another to his domain.

Remember this news a couple months ago?  It was cute right?  Nothing earth shattering, just another layer to do your Bing Maps mashups over (assuming you are one of the 5 people who have ever done that).  But deeper something else was going on.  See Google broke the detente that the vendors had with the data providers. (can you believe that was barely a year ago?)  In doing so it put a ton of pressure on the other mapping API vendors to change how they did business.  Despite the problems with Google Maps, the one thing it had going for it was that it could be updated.  Microsoft was stuck with the old model.  Navteq is authoritative1 and that means it takes months to update the data.  Google’s navigation might have been totally borked, but at least they controlled it.  Microsoft and MapQuest didn’t have the luxury.

So MapQuest went first and in a big way.  Not only did they announce they were breaking with their data vendor, but they were also going to donate money and time back to OSM to help further the project along.  Already MapQuest’s Open website is running and those at least in the UK are happy as clams.  But despite all those German OSM mappers doing great work in the middle of Europe, for OSM to be viable it needs to have a workable/routable map in the good old USA.  This was the whole concept behind those Cloudmade ambassadors.  The idea was they could have succeeded if they had the map right.  Well the reality of the scope of the project killed Cloudmade’s efforts and the USA has lagged behind.  What the OSM project needed was some company that could do the heavy lifting and move the project forward in the USA and other parts of the world where it needed help.

So here we are.  Microsoft needs to get involved with OpenStreetMap to continue to be relevant in the web mapping space and OSM needs Microsoft, their aerial images, their big pocketbook and their need to dominate all spaces they exist to join up.  Simple as pie, right?  Oh, but wait — the minute Microsoft enters the community, they’ll be a huge backlash.  I mean the goal of Microsoft is to put a proprietary OS on everyone’s desktop (at least that is the feeling I got from an OSMer at WhereCamp5280).  Ah, but remember this wonderful news?  Who better to represent Microsoft with OSM than one of the founder’s of OSM!

So what does this mean, really?  Short term, not too much.  The OSM data in the USA is still not good enough to route with2.  But the better aerials will improve the USA greatly and quickly.  If there is one thing that Microsoft has done well, it is the aerial imagery in the greatest democracy south of Canada, north of Mexico; OSM-US

Makes you wonder about Google’s choice to roll their own now doesn’t it?  How quickly Google’s map looks like it will be a drag on their innovation.  Between the OSM mappers, MapQuest, Microsoft and all the others who are part of the open project; I see no way OSM doesn’t dominate the market as the choice for mapping data moving forward.  And you know who wins, everyone who wants free and open data.  That’s the take away — congratulations to Steve Coast because he sure deserves success, but the real winners here are you and I.

1. By authoritative I mean busted and old business model.

2. Flame away guys, but you’d be wrong to think otherwise!