idimension can leverage both google and yahoo advanced mapping APIs to cost effectively allow mapping of your store or office locations.

Have you ever driven to a mall, parked at one of the big department stores, then discovered the store you needed to go to was on the other side of the mall? What about experiencing the frustration of not knowing where in the mall is the store you need and the mall directory is nowhere in sight? And with malls being extra busy now that we’re in holiday season, we’ll take anything we can get to help us get in, get out, and avoid the crowds.

With this in mind, Bing Maps is introducing mall directory maps that will help you easily navigate shopping malls and retail stores. Try one out: Roosevelt Field Mall 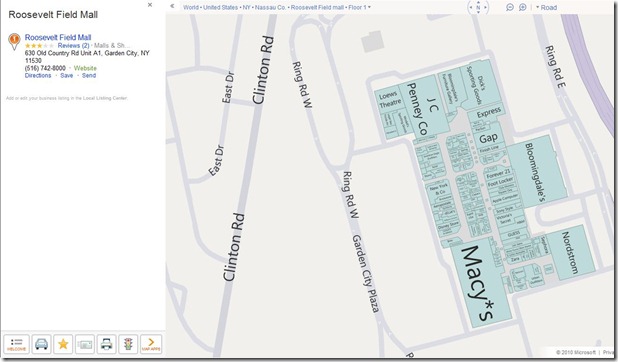 Google will launch earlier promises online store for applications and services for users of Chrome web browser and operating system ChromeOS. This store will allow users to find, install and purchase Web-based applications, such as those that Google already offers paid platforms.Internet shop Chrome Web Store on opportunities and structure will resemble the existing Android Market and Apple App Store.

Representatives of the Internet giant said today that in Chrome 8browser version occurred maintenance of that store applications, in addition, the new version is available and a special menu for the entry and use Internet-shop applications.

Today, Google introduced some new data for application developers in the project Chromium.

Remember that Google originally planned to launch application store in October. However, in October, the company said Chrome OS will be delayed, and online store for her.

Today, developers of Google said that in the first stage of the store will be available at least three types of applications:first – the so-called “installation on the website, ie usual site with some meta-data to allow their use as a hosted-applications, and the second – these are topics with which you can personalize the appearance of browser and operating system;third – this extension will allow completion of the functionality itself Chrome.