This past week, several devastating tornadoes struck across a wide swathe of the southern United States. Our Crisis Response team is activating to provide data and imagery we hope will be useful to first responders and the general public.

In cooperation with our satellite partner GeoEye, we have imagery of the aftermath of several tornadoes, including in Tuscaloosa, Alabama as shown below. We have created several before-and-after comparisons in a Picasa album. 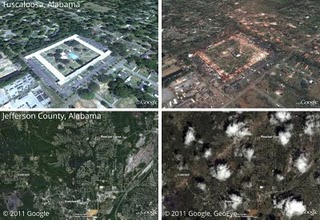 This imagery, as well as data sets such as Red Cross shelter locations and tornado touchdown reports, are available in this collection on Google Maps. We will continue to add imagery and data as it comes available.

Our heart goes out to everyone affected by this tragic event.

Update: You can now access the satellite imagery directly in Google Earth. Make sure the Places layer is enabled, then go to Alabama. Click the image of a tornado to find links to load the images.