When it comes to using the Follow Me tool, most folks have it wrong. There are actually two different ways to use Follow Me, and one works way better than the other.

Follow Me: The Hard Way
The wrong way to use Follow Me is to activate the tool, click the face you want to extrude, and attempt to drag it along a set of edges. This method barely works; it’s painfully inefficient in all but the very simplest of circumstances. Save yourself a bunch of frustration and never use Follow Me this way again.

Follow Me: The Right Way
Next time you need to extrude a face along a path, use Follow Me this way: 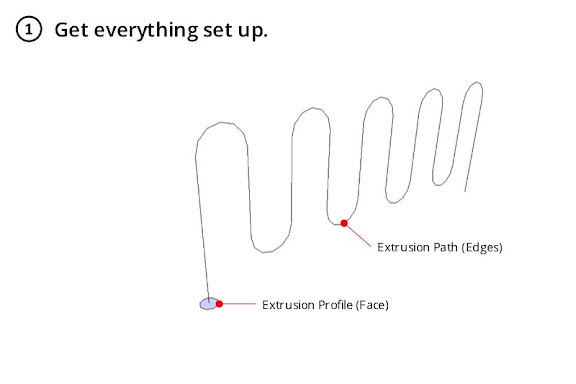 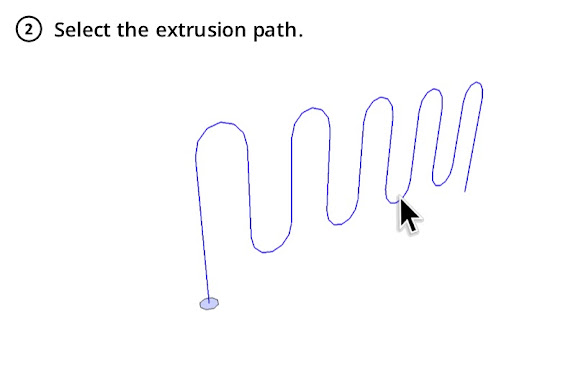 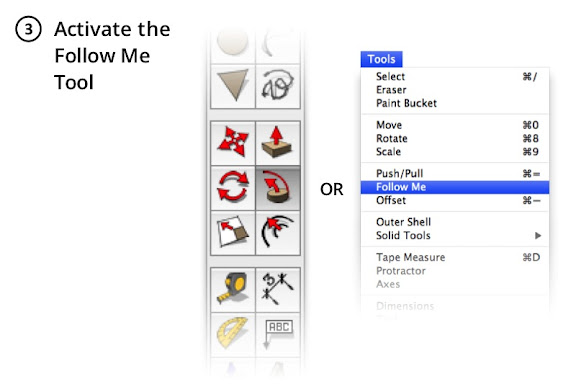 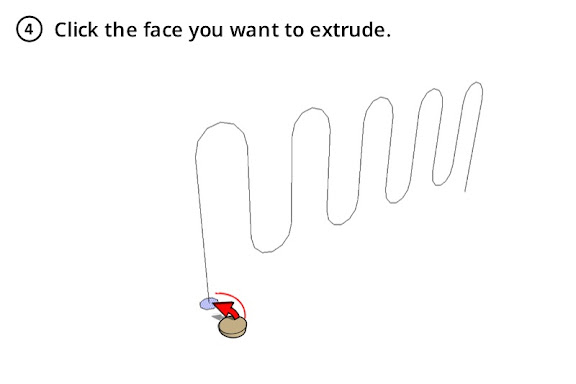 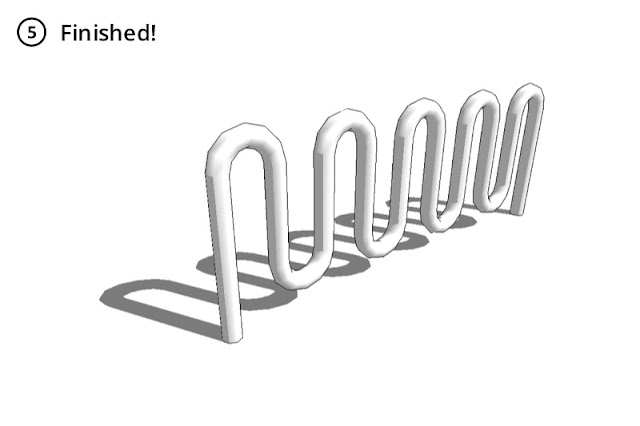 That’s all there is to it. You can take your time selecting exactly the edges you want. You can orbit, zoom and pan in order to select a complex three-dimensional path. No more cussing and sweating while you try to get the extrusion to go exactly where you want it to. Sometimes a little knowledge can save a lot of headache.

A few great new items have been released to help make SketchUp an even more powerful product to use.

The first is the release of Shaderlight v2. Shaderlight it’s a great plugin that helps make your SketchUp models look amazingly realistic. With Shaderlight v2, it’s even better. 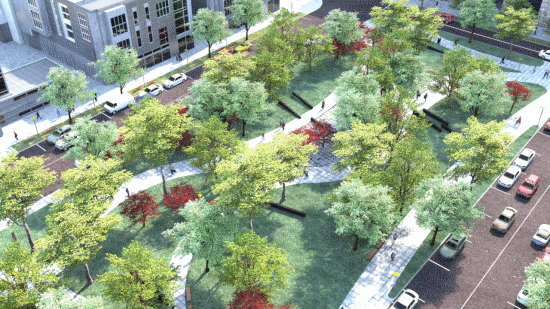 You can read more about it on the Shadelight blog, or check out some videos of the new features on their YouTube channel.

The other interesting release is the PCB Converter plugin from RS Components. This plug-in can convert 2D circuit board designs from IDF to COLLADA, which SketchUp can then read and write. 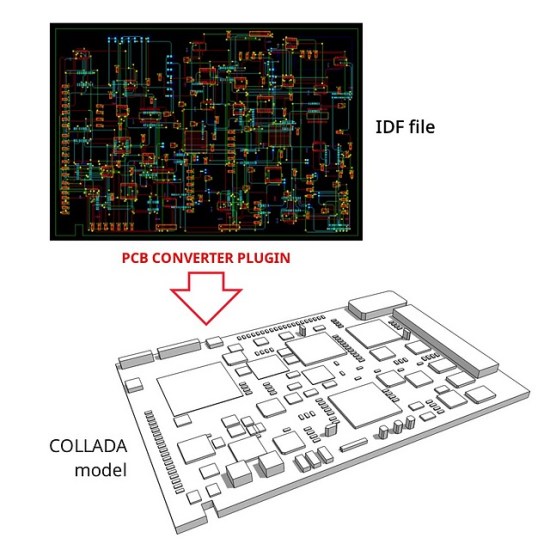 For more about how this tool works, you can check out the Google SketchUp Blog or watch the short video below:

18 months in the making:WMS Cascading

Something many users have asked for since the very addition of WMS support is cascading, the ability of GeoServer to proxy for another remote WMS server (be it GeoServer, MapServer, or ArcGIS). This feature has many uses, such as pulling in a remote base layer and overlaying local vector data onto it or securing a locally unsecured map server. Special thanks to the University of Perugia for sponsoring this feature.

Anyone who has published a large number of layers or feature types with GeoServer has probably at some point been annoyed by the fact that every single layer is published by a single global service. WMS has the ability to group and nest layers but WFS and WCS have no such equivalent. Thanks to virtual services, one can create multiple service endpoints within a single GeoServer instance. Special thanks to Landgate for funding this work.

GeoServer has always been good at publishing a flat database table but users often need to do more—such as pre-filter the data in a table, join two tables together, or generate column values on the fly with a function. Before this feature, the recommendation was to create a view, yet views can be a maintenance burden and are at times problematic.

Now one can create a layer directly from an SQL query and query definitions can be parameterized to create dynamic queries on the fly. These parameters can be restricted with regular expressions to prevent an SQL injection security hole.

Special thanks to Andrea Aime for spending much of his personal time on this one and to OBIS for providing the funding for the parametric component of the work.

With 2.1 and the arrival of WPS we welcome a new OGC service into GeoServer. The Web Processing Service is an OGC service for performing geospatial analysis functions over the web. The specification is extensible in nature and allows for simple processes ranging from buffering a geometry to more complex processes such as image processing.

Historically, GeoServer has been focused on data delivery and did not provide tools for performing analysis on spatial data. WPS fills that gap, making GeoServer a more compete solution for geospatial web services.

Thanks to Refractions Research for the initial contribution of the WPS module and to Andrea once again for taking personal time to bring WPS support to its current state.

Support for units in SLD allows one to specify values in measurements other than pixels such as feet or meters. This adds a very powerful capability to SLD that may alleviate the need for multiple scale-dependent rendering rules and may greatly simplify complex SLD documents.

Special thanks to Milton Jonathan for the initial GeoTools work to make unit of measure support possible and to Andrea for working with Milton to improve the initial patch. Note that this feature has also been backported to the stable 2.0.x branch thanks to support from SWECO and Malmö City of Sweden.

GeoServer renders images at a resolution of 90 DPI by default. While this is acceptable for most standard screen resolutions, it is unacceptable for higher-resolution printed materials. Now it is possible to supply a format option to a WMS request to control the DPI setting on the fly.

Special thanks again to SWECO and Malmö City of Sweden for sponsoring this work. Note also that this feature has also been backported to the 2.0.x branch.

Ever found it difficult to remember the full path when loading a shapefile or GeoTIFF? This new improvement brings an easy graphical file and directory selection tool for browsing the file system on which GeoServer resides. This is definitely a great enhancement to make GeoServer even easier to configure.

GeoServer’s core catalog interfaces received some tweaks to more easily support different backend storage formats. The current in-memory implementation has a number of drawbacks—the most notable being that it is memory-bound, meaning it cannot scale to accomodate large numbers of layers. Support for specific new storage formats is still only available as a community module but these core improvements make it possible to more easily swap between different backends.

Adding new fonts to maps should now be much easier, as one can drop font files directly into the GeoServer data directory and have them be recognized by GeoServer. The admin interface will list all fonts that are currently available, including those made available by the Java Virtual Machine.

GeoServer has always had Acegi Security at its core but since that library was absorbed by the Spring community it has been improved and upgraded into Spring Security, the official security module of the Spring portfolio. This brings a number of new security protocols to GeoServer, including OpenID and Windows NTLM. With even more powerful options, it should now be easier to customize the security setup.

While WFS and WMS have both had the ability to limit what a user can request, now similar controls are in place for WCS calls as well. Thanks to MassGIS for funding this improvement.

WMS 1.3.0 is the newest version of the Web Map Service protocol. Special thanks to Ordnance Survey, Britain’s national mapping agency, for providing OpenGeo with funding to complete its implementation in GeoServer. With WMS 1.3 mandated by the INSPIRE Initiative, Ordnance Survey opted to fund the GeoServer project so that other organizations in the UK and the rest of Europe could meet their INSPIRE requirements and everyone across the globe could benefit.

Though not every new option is fully-supported, it is now possible to use most SE 1.1 documents in GeoServer. User feedback on which new options should be supported first is greatly appreciated. Also funded by Ordnance Survey is a community module to implement the WMS extensions for INSPIRE View Service compliance—namely the language parameter and several extended capabilities fields.

GeoWebCache integration allows clients to enjoy the benefits of tile caching through the regular GeoServer WMS endpoint. This enables GeoWebCache to transparently proxy for the GeoServer WMS without the need for a separate service endpoint. Taking advantage of the recently-added disk quota functionality, GeoWebCache now provides the ability to set limits on the amount of disk space used for storing tiles, allowing users to control and limit the size of the tile cache on disk. Big thanks to Gabriel Roldán of OpenGeo for the great GeoWebCache improvements.

This release also brings some improvements to RESTConfig, which is now shipped with GeoServer by default. Improvements to the API include a file upload operation that now allows for uploading files into an existing data store. This addition allows users to upload a shapefile and have it automatically converted into a PostGIS database and published as a PostGIS layer rather than as a Shapefile layer. The API also supports recursive DELETE operations, making it more convenient to remove resources that contain other resources such as stores or workspaces. Thanks to David Winslow and Justin Deoliveira of OpenGeo for these improvements.

Thanks to some great work from GeoSolutions, raster reprojection performance has been significantly improved by using linear appoximations of transformation functions.

Thanks to Andrea Aime, there is now a Web Coverage Service request builder for graphically building WCS requests to test a coverage service. As clients for WCS have always been sparse, this tool goes a long way towards making the service more usable.

There now exists a new parameter that will once again allow multiple GeoServer instances to run from a single data directory. This parameter, named “GWC_DISKQUOTA_DISABLED”, will disable the GeoWebCache disk quota module and prevent it from maintaining a lock on the data directory.