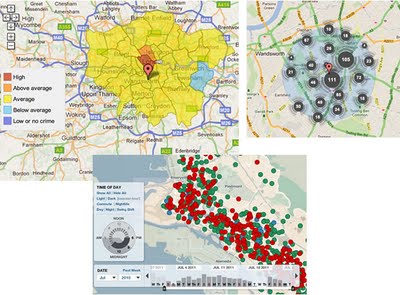 No Collation: The first map is Oakland Crime Spotting (bottom inset in figure) that is very similar to San Francisco Crime mapping, reviewed here. Unlike the other two maps it attempts no point collation at all, I image the authors would argue that they deal with the problem by providing sophisticated filtering tools to reduce the point density. However, it doesn’t help if the user wants to get an overview picture of crime across the area the map covers.
Traditional Choropleth: Switching to the the UK, the Metropolitan Police (=London for non UK readers) offer a choropleth map based on wards and subwards (top left insert). I regard this as the traditional approach. Notably it doesn’t show actual figures for postcodes, only sub wards – a sub ward is a collection of postcodes. My problem with this is that almost no one knows the boundaries of wards and sub wards so its a strange way to split the city up. (Aside: in my experience, Londoners tend to split London up based on tube stations)
Point Collation: The UK police offer a national map which uses point collation (top right insert). This is the main one we’re planning to test as IMHO it isn’t an effective way to visualise the data (related post). It offers a finer grain of data – you don’t actually see the true location of the crime but it is collated down to the postcode level. In London, a postcode is roughly equal to a single street.

Who better to start off Loci 2010 than Greg Sterling? Greg is an indefatigable writer (how does he get anything else done?) and provides the strategic insights as well as the scoop on the “daily deal” to all of us in the industry. He can be found at Screenwerk, SearchEngineland and Internet2Go. He speaks at and organizes a number of conferences and you will find him speaking next at his Conversational Commerce Conference February 2-3 in San Francisco.

Local-social-mobile is the new mantra for many financial analysts and VCs. Indeed, we saw a range of developments in 2010 that tied these arenas closer together. It was a watershed year for the mobile Internet and the year that everyone started to take local very seriously – most notably Google. Executives at Google declared local not only a major priority but the company’s “top focus.” High-profile but unsuccessful attempts to buy Yelp and Groupon testified to that.

The following are list of the top trends and developments that I believe were significant in “local” or local marketing this year:

1.     Mobile: the rise of mobile and smartphones in 2010 helped focus new energy and attention on the importance of local and location

2.     Google’s surge into local was significant on several fronts and many product areas. There were so many local-related initiatives this year by Google it’s hard to keep track of them all. The launch of Place Search and the new UI that emphasizes local content on Google is reflective of this larger cluster of local moves by the search engine

3.     Group buying and Groupon: in 2010 this phenomenon came out of almost nowhere to culminate in an aborted $5++ billion takeover by Google at the end of the year. There are well over 100 “Groupon clones” operating in the market and many more if you include the traditional media companies that have adopted the daily deals model

4.     Facebook: Facebook launched check-ins and Places. It also launched Deals as a tool to reward check-ins. While each of these offerings is still “1.0” Facebook’s huge footprint can bring a kind of scale to location and deals that few others can match, save Google or perhaps now Groupon in some limited respects.

5.     Local product inventory: a number of startups emerged and joined a group of existing companies trying to bring real-time product inventory data online. In Q4 NearbyNow and Milo were acquired and Google launched its own effort.

6.     The rise of ‘free’ local data: there are now several companies, including Facebook, Google, Factual, Placecast and SimpleGeo offering free local data to developers. Over time these offerings will become better, more flexible and richer, enabling much more competition in the local, and especially local-mobile, segment. The “free database of places” removes a front-end barrier to developing local sites or applications

7.     Local ad networks: CityGrid, Chitika, xAD, WHERE, Verve, Marchex and others emerged with local monetization offerings that hadn’t existed 12 months ago.  This is significant for local (and mobile) publishers and developers. Now there are a number of high-quality alternatives to Google and conventional ad networks that offer generic national ads with geotargeting

9.     Social as alternative to SEM: While social media and search ultimately go together social marketing emerged as a kind of parallel universe and in some cases alternative to to more traditional PPC-search marketing. And for many smaller companies social media are more “comprehensible” than paid-search or SEO.

10.   Noise and more noise: From a small business perspective the world of digital marketing and advertising became vastly more complex, confusing and “noisy.”

Two weeks ago, we celebrated with the people of Oberstaufen when we made available the first ever images for Street View in Germany. Today I’m pleased to let you know that you can explore even more of Germany because we’ve just released 360-degree, street level imagery of Germany’s 20 largest cities, including Berlin, Hamburg, my home town of Munich and more.

If you haven’t yet been to Germany, or if you simply want to refresh your memory from a previous visit, here are some places that might be fun to explore. These panoramic images that virtually transport you without the hassle of a plane ticket are now accessible directly from Google Maps.

Okay, I know it’s obvious, but the Brandenburg Gate in Berlin is one of Europe’s most iconic monuments: 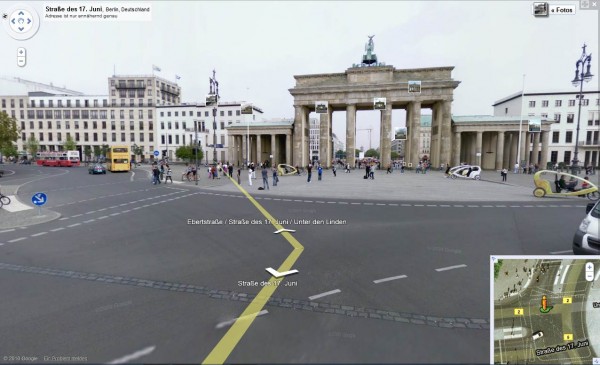 For a complete change of scenery, check out this traditional German architecture, near Hamburg’s historic port in Speicherstadt:

And here’s a personal recommendation for a place where I spend a lot of time and is a good example of a traditional German cafe:

In this latest Street View release, we’re also making some improvements to the way we obscure images of houses, cars or people when asked to do so using our “Report a problem” tool. Our new manual blurring process completely blocks out a house, car or person, but no longer cuts out all the surrounding scenery as well, such as a nearby street sign or trees. This enables us to respect requests for removal without blacking out the entire area.

Since first using this new blurring method in Germany a couple of weeks ago, we’re now rolling this out everywhere Street View is available for all new removal requests. As always, people should continue to use the “Report a problem” tool and we’ll review all requests promptly.

We hope you enjoy your virtual travels to Germany!