This video shows you how to combine Google Earth’s Elevation Profile Tool with the USGS’s Digital Geologic Maps of the US States. You can quickly create a way of comparing topography with the underlying bedrock geology. See more, including written steps to the process here: virtualfieldwork.org 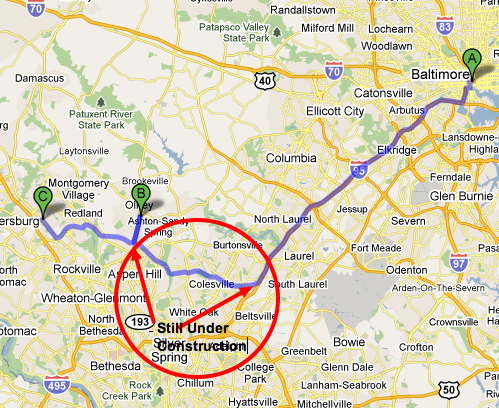 The Baltimore Sun reported on Saturday that Google Maps is erroneously showing the complete Intercounty Connector between I-95 and Gaithershburg Md as being open. Apparently Gogle driving directions are directing drivers along a 12 mile stretch between I-95 and Georgia Ave that still “is largely a muddy track where bulldozers are still doing what bulldozers do”.

This particular case is interesting to me for several reasons.

It is a high profile error in a very densely populated area of the US that has lots of road traffic. The Maps error has been picked up by the Washington Post and the regional NBC affiliate as well as the Baltimore Sun. Coverage of the issue has been persistent with the Baltimore Sun following up on their original reporting on 3/27 noting that 48 hours after reporting the problem to Google the problem is still in Maps.

Clearly, the reporter, Michael Dress of the Sun, thinks that Google should be able to fix the problem in a 2 day timeframe and is dismayed that it remains unrepaired. It is a reasonable expectation to think that a critical mapping error be fixed in 2 day timeframe. Whether Google can or will is another question. Typically they take 30-60 days to act on these corrections.  One of the realities of privatization of essential public services like this is that without strong and enforced regulations, the decisions like these are dictated by profit and not the needs of people. Should a private company that is providing a product for free be held to a higher standard when their product affects public safety in the public realm?

Secondly this story has already achieved a fairly high level of visibility by virtue of being covered in media sources that are very high profile and effectively national in scope. Google, in the past, has held that these types of public exposure have little impact on their willingness and speed to affect changes. Most in the SEO industry have seen obvious examples of “hand jobs” that seems to bely that. This will be an interesting case to test whether Google actually does intervene in these types of cases.

Thirdly and a bigger question is whether the overall quality of the underlying Maps data has improved over the past 12 months. Google stopped using TeleAtlas and started using their own geo data in October of 2009. They implemented a system of end user geo error reporting at the same. In May of last year, Google hired 300 temp workers in the Maps arena to improve the quality. As recently as last September, this reporting system was behind Google’s stated commitment of fixing geo errors in 30 days and there still was some reporting of whole towns going missing.

However since that time, complaints seemed to have dropped. While there have been some problematic and visible examples of large scale geographic map errors, for the most part the quality of the underlying map data seems to have generally improved. This seems to be true in both urban areas and rural areas as well.

Certainly the number of high level complaints on my radar has decreased. It was a common issue that affected visibility of business listings but reports in the Places forum of the problem have declined. Not a perfect proxy of reality but one that should reflect the general direction of the quality of the underlying data as businesses have a very high vested interest in being found and are thus motivated to report the problem. In my anectdotal test of Google’s mapping errors in my home town, most have been fixed.

It has been reported that Google receives over 10,000 corrections an hour to their maps. That’s a million corrections received every 4 days and over 87 million some odd changes every year. Do you think that they actually improved the underlying quality to a level appropriate for business listing accuracy?

Would love to hear your opinions on whether you think that Google has improved the quality of the underlying geo-data over the past year.

The integration between Google Fusion

Tables and Google
Maps API Premier makes it extremely easy to visualize thousands of
locations on a map. Fusion Tables is a powerful, cloud-based database
with geospatial smarts; you can attach a location to any record and
then execute geospatial queries to find the relevant records.
Organizations that need to map sensitive or private data will
appreciate our new Protected
Map Layer. For Maps API Premier customers, simply pop in your client
ID into Fusion Tables and voila, you can visualize your data in
your Maps API Premier implementation (and ONLY your implementation)
and your underlying data tables are kept entirely private.

The marriage of Maps API Premier and Fusion Tables enables a true
cloud-based location platform: no servers to stand up, no database
applications to install – just upload your data and display it on a
map. Dead simple and keeps your data safe – just as it should.