You can now use your desktop to create a biking or walking itinerary using Custom Maps in Google Maps. You can choose to share these directions by allowing people to view your Custom Map and avoid the hassle of scribbling them down or printing them out. Additionally, you can access these stored directions from your phone with the Google Maps Android application.

This provides a quick and easy way to navigate trips that have multiple routes and stops when you’re on-the-go. Give it a try the next time you plan a group bike ride or to keep track of your favorite jogging routes.

To start, first get directions to your destination(s) and select the biking or walking icon in Google Maps. Next, scroll down to the bottom of the directions in the left-hand panel and click the “Save to My Maps” link. 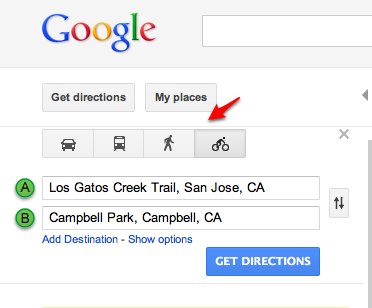 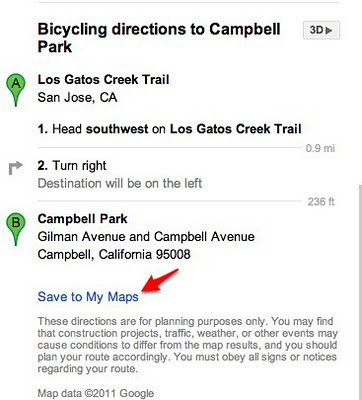 You can then save the directions to an existing custom map or create a new one. Once the directions have been added to a custom map, you can continue to insert extra stops or make notes. After you complete mapping out your itinerary, you can choose to share it with friends or a workout buddy. 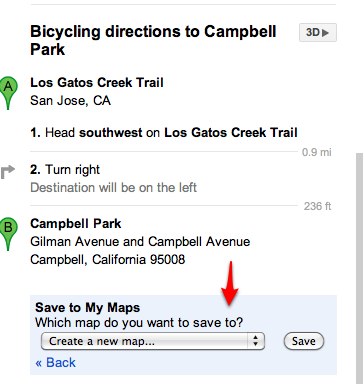 If you have an Android-powered device, you can access stored directions in Custom Maps right from your mobile phone – just click on the layers icon in the upper toolbar and select the saved Custom Map you want.

If you don’t have an Android phone, you can open your Custom Maps using your phone’s browser and visiting maps.google.com.

Google I/O is always a fantastic opportunity for the Maps API team to meet face to face with some of the many Maps API developers worldwide. We believe our developer community is one of the biggest strengths of the Google Maps API, and with over 350,000 web sites actively using the Maps API, there is no shortage of skilled and helpful expertise to tap into.

However Google I/O is not the only way in which we engage with developers. The Google Maps API Google Groups are thriving communities and many of us on the Maps API team enjoy listening and engaging in discussions held on these Groups. In addition we also have the Google Maps API Issue Tracker, a tool with which any Maps API developer can report problems with the API, suggest new features that they would benefit from, or star existing issues or features.

The Google Maps API team takes the problems and ideas featured on the Issue Tracker very seriously, and although we can not always address every issue that is raised, we do consider any that attract a lot of stars. Recently one feature request in particular has been head and shoulders above the rest in terms of the number of stars it has attracted. It therefore only seems appropriate today, as we sit down with our developer community for a Fireside Chat, that we respond to that request by launching a Directions Web Service.

The Directions Web Service is a companion to the existing Geocoding and Elevation Web Services, and allows applications to obtain Driving, Bicycling, and Walking directions through an XML/JSON REST interface. All of the features of the Map API v3 Directions service are supported, including “avoid highways”, “avoid tolls”, and waypoint optimization (travelling salesman solver). For more information, check out the Directions Web Services documentation.

If you have a great idea for a new Maps API feature, please don’t hesitate to submit it to the Issue Tracker. If your idea proves to be popular, we’ll do our best to make it a reality.