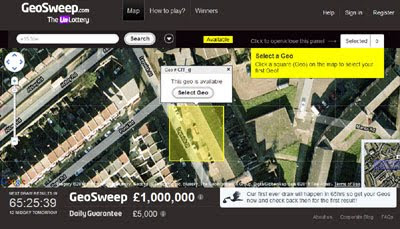 Every couple of months or so I get an e-mail from someone who has come up with the bright idea of setting up a Google Maps application that lets people pay them to own virtual real-estate on their created map. For some reason I’m not overly keen to promote these get-rich-quick schemes on this blog.

When I first heard about GeoSweep a few weeks ago I have to admit that I was a little dubious about the idea of holding a lottery using locations selected from a Google Map. GeoSweep is a UK nationwide game that involves users buying locations with a 10p stake. These plots are then entered into two daily draws, the first pays out a guaranteed minimum prize pot of £5,000 and the second gives players the chance to win £1 million.

Some of my concerns about GeoSweep have been assuaged by the success this start-up has had in attracting investment. GeoSweep has so far managed to raise over £2 million in investment and have put together a team of 15 who are now working out of their offices in London.

GeoSweep also promise that the odds of winning their location lottery are much better than the UK National Lottery. Check out the video below to view Geosweep’s shiny new promotional video: