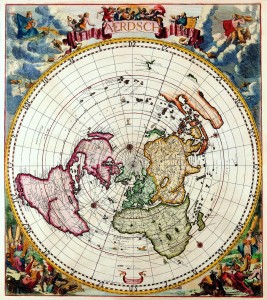 Iacobus Robyn Cum Privilegio… Amsterdam, 1696/c.1700. Pair of celestial and terrestrial spheres measuring 23” x 20 1/2” each. Full orig- inal color. Full margins. Excellent con- dition. $39,000. [color image on inside back cover] Unusual with full margins. We have never seen an example of either the ter- restrial or celestial map which has not been trimmed on the sides with loss of printed surface, as the map had to be trimmed to fit into the atlas. Published by Cornelis Danckerts, this pair was most likely separately issued c.1700. The terrestrial map is a single-sheet version of Robyn and Donker’s large four-sheet map of the world (1687) in a single circle. “It seems very likely that this single-sheet version by Jacob Robyn was also devised by Andreas van Luchten-burg whose participation is acknowledged on the companion celes- tial map. The new and distinctively drawn mythological scenes in the cor- ners of the map were almost certainly engraved by Jacob Harrewyn who col- laborated closely with both Robyn and Luchtenburg at this time” — Shirley. The map is on the equidistant azimuthal projection centered on the north pole. The same projection was used by J.B. Nolin for his version of Cassini’s world map also published in 1696. Robyn has not updated the interi- or of North America, “where only one large Great Lake is indicated and Nieu Nederland is still marked rather than New York as it became in 1664” — Shirley. ref: Shirley, The Mapping of The World, #582, plate 402, Rarity Index R