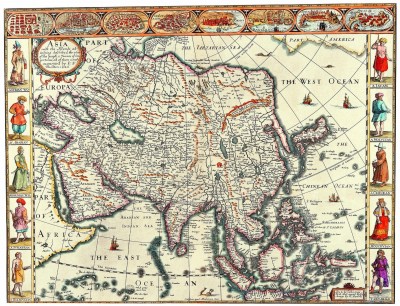 Asia with the Islands adioyning described, the atire of the people, & Townes of importance, all of them newly augmented . . . 1626

The Great Wall of China is shown, along with and Elephant above the source of the Ganges. A nice simple/naïve Northeast passage is shown, along with a piece of North America and sea monsters in the extreme North Pacific and Southern Indian Sea. The text on the verso presents a fascinating Anglocentric view of Asia in the early 17th Century.