Over the past two years, we’ve made public data easier to find, explore and understand in several ways, providing unemployment figures, population statistics and world development indicators in search results, and introducing the Public Data Explorer tool. Together with our data provider partners, we’ve curated 27 datasets including more than 300 data metrics. You can now use the Public Data Explorer to visualize everything from labor productivity (OECD) to Internet speed (Ookla) to gender balance in parliaments (UNECE) to government debt levels (IMF) to population density by municipality (Statistics Catalonia), with more data being added every week.

Today, we’re opening the Public Data Explorer to your data. We’re making a new data format, the Dataset Publishing Language (DSPL), openly available, and providing an interface for anyone to upload their datasets. DSPL is an XML-based format designed from the ground up to support rich, interactive visualizations like those in the Public Data Explorer. The DSPL language and upload interface are available in Google Labs.

To upload a dataset, click on the “My Datasets” link on the left-hand side of the Public Data Explorer. Once imported, a dataset can be visualized, embedded in external websites, shared with others and published. If you’re an official provider, you can request that your datasets appear in the Public Data Explorer directory; please contact us to discuss this process. 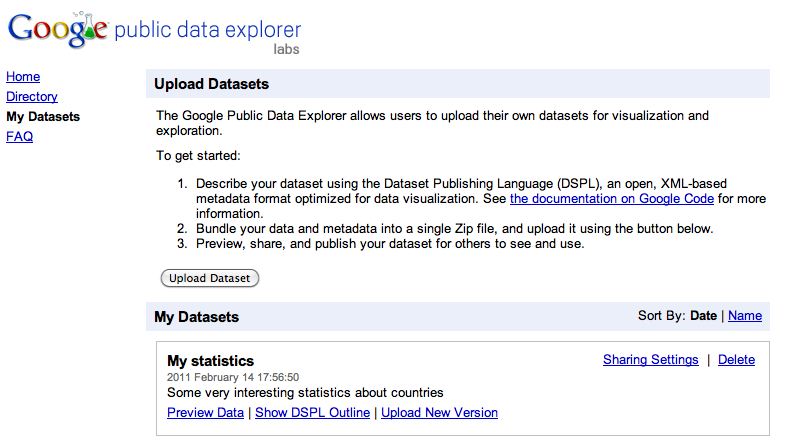 With this new capability, we hope more datasets can come to life through Public Data Explorer visualisations and enable people to better understand the world around them and make more informed, data-driven decisions. Stay tuned for more datasets, visualization features and DSPL extensions in the future.

Android 3.0 (Honeycomb) is a new version of the Android platform that is designed from the ground up for devices with larger screen sizes, particularly tablets. It introduces a new “holographic” UI theme and an interaction model that builds on the things people love about Android — multitasking, notifications, widgets, and others — and adds many new features as well.

Besides the user-facing features it offers, Android 3.0 is also specifically designed to give developers the tools and capabilities they need to create great applications for tablets and similar devices, together with the flexibility to adapt existing apps to the new UI while maintaining compatibility with earlier platform versions and other form-factors.

Today, we are releasing a preview of the Android 3.0 SDK, with non-final APIs and system image, to allow developers to start testing their existing applications on the tablet form-factor and begin getting familiar with the new UI patterns, APIs, and capabilties that will be available in Android 3.0.

Here are some of the highlights:

Support for multicore processor architectures: Android 3.0 is optimized to run on either single- or dual-core processors, so that applications run with the best possible performance.

For an complete overview of the new user and developer features, see the Android 3.0 Platform Highlights.

Additionally, we are releasing updates to our SDK Tools (r9), NDK (r5b), and ADT Plugin for Eclipse (9.0.0). Key features include:

To find out how to get started developing or testing applications using the Android 3.0 Preview SDK, see the Preview SDK Introduction. Details about the changes in the latest versions of the tools are available on the SDK Tools, the ADT Plugin, and NDK pages on the site.

Note that applications developed with the Android 3.0 Platform Preview cannot be published on Android Market. We’ll be releasing a final SDK in the weeks ahead that you can use to build and publish applications for Android 3.0.

The past few weeks have been exciting ones for the Android team: we recently released Nexus S and Android 2.3, Gingerbread, and we’ve even had some of our most popular team members take a trip to space. But we haven’t stopped buzzing with excitement: today at the Consumer Electronic Show (CES) in Las Vegas, we previewed Android 3.0, Honeycomb.

Honeycomb is the next version of the Android platform, designed from the ground up for devices with larger screen sizes, particularly tablets. We’ve spent a lot of time refining the user experience in Honeycomb, and we’ve developed a brand new, truly virtual and holographic user interface. Many of Android’s existing features will really shine on Honeycomb: refined multi-tasking, elegant notifications, access to over 100,000 apps on Android Market, home screen customization with a new 3D experience and redesigned widgets that are richer and more interactive. We’ve also made some powerful upgrades to the web browser, including tabbed browsing, form auto-fill, syncing with your Google Chrome bookmarks, and incognito mode for private browsing.

Honeycomb also features the latest Google Mobile innovations including Google Maps 5 with 3D interactions and offline reliability, access to over 3 million Google eBooks, and Google Talk, which now allows you to video and voice chat with any other Google Talk enabled device (PC, tablet, etc).

Please stay tuned for more Honeycomb news from the Android team. For now, you can get a taste of Honeycomb by checking out this video.