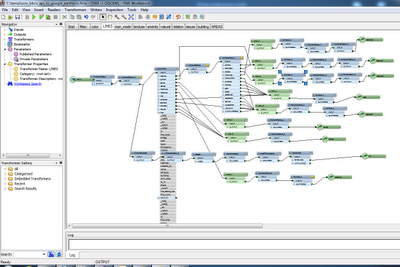 Back in October, Chris Yonge of Studio Cruz and Christiaan Adams created a very cool Google Earth Tour for the San Francisco Fleet Week. The tour includes a voice overlay, images, video and more, all in one nice package.

To view the tour, you can download this KMZ file or simply watch the YouTube video below:

Because of the complexity of the tour, Chris and Chritiaan wrote up the following information on how they came up with the idea for the Tour, as well as how they were able to put it together technically. Hopefully this information is helpful if you plan to build a similar Tour for a project of your own.

This project emerged from a desire to help Fleet Week 2010 showcase its mission using a 3D animated tour in Google Earth.  Studio Cruz was recommended by the Google Earth team, and was chosen as the developer, after having produced other successful Google Earth tours, including one for Potter Drilling of Redwood City, CA in 2009, which was showcased at the Copenhagen Climate Change Conference.  Studio Cruz worked with the Fleet Week organizers to create the seven minute tour in advance of the Navy and Marines’ Fleet Week celebration in early October 2010.  The timescale was tight – only five weeks – but since no complex coding was involved it was judged possible.

The tour had three goals: to introduce the concept of Fleet Week to the public, to explain the serious purpose behind the public events (liaison between Navy and civilian disaster relief specialists), and to provide a brief history of the US Navy’s disaster relief work in the SF area and around the world. The script directed that the tour be graphics intensive, including four YouTube videos, interactive balloons, screen overlay animation, a live link to an existing online KMZ history of Bay Area earthquakes on a USGS site, and precisely synchronized professional narration.

Studio Cruz began work on the tour in early September. The YouTube videos were downloaded as Flash videos using RealPlayer, trimmed to the relevant sections using Moyea FLV Editor, then uploaded as new videos ready for embedding into the relevant parts of the tour. The script was split into 45 sections of between one and three sentences, and placeholder MP3s were created in the studio. These were later replaced by the professional narration. Photographs provided by the Navy were cropped and resaved as JPGs, and screen/ground overlays were built in Photoshop and saved out as 24-bit PNG files.

Building the tour took slightly over a week, with coding and graphics being made by Chris Yonge, principal of Studio Cruz. Since Google intended the tour to be revised and reused for future Fleet Weeks the KML code was extensively commented, down to the words spoken in each piece of narration. After the build stage, the placeholder narration audio files were replaced with the final professional versions. This required minor timing adjustments throughout the tour, but once that was done the tour was delivered and posted.

Google also wanted a video version of the tour for visitors to the Fleet Week site who did not have Google Earth. For clarity and quality this was done using the screen capture program Camtasia; the resulting AVI files were assembled in AfterEffects and adjusted. However, some parts of the tour did not capture well: in particular the slowdown caused by Camtasia operating in the background meant there was an unacceptable pause before the YouTube videos started. The decision was made, a few days before the deadline, to rewrite the tour specifically for the video capture. Animation, video, narration, and interactive balloons were removed from the KML file. The reduced tour was run and captured as a video in Camtasia, and the resulting files imported into AfterEffects. The removed items were then replaced as individual layers, resulting in much higher quality. The raw animation was around 14 Gb, which was compressed to 700 Mb for uploading to YouTube. It can be seen at http://www.youtube.com/watch?v=Le5GqmV6ASg.

Both the tour and video were completed on time and to budget. The video alone had over nine thousand views the first weekend. Studio Cruz can be found at www.studiocruz.com.